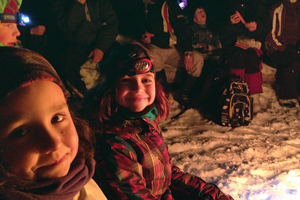 I’m deep in the woods, in the dark, with my three young children trudging through huge drifts of snow as we search for a way back home. A strange man emerges from the bushes and stops us in our tracks. In a twisted Scottish accent he describes the gory details of a scalp-scraping bear attack on his friend, Chief Short Legs. He points the way towards a fire pit where other travellers have been known to rest and dine on chocolate fondue. It’s just the beginning of an adventure full of mystery, history and Canadian culture.

We’re on Crystal Mountain with snowshoes strapped to our feet and cough candies tucked in our pockets, surrounded by about 30 other brave souls who signed up for what I thought was a simple jaunt in the woods. Our hosts are Jordie and Laurie Bowen of Selah Outdoor Explorations. Turns out we’re in for a four-hour wild and whimsical snowshoe trek filled with spontaneous poetry, singing and skits on the history of the land.

According to the man in the woods, who claimed to be fur trader Alexander Ross lost in a time rift on the mountain (but looking suspiciously like one of our highly entertaining hosts), Trepanier Valley in Peachland is named after a skull operation called “trepanning” that he preformed on one of his men. Alexander (Jordie) relives the event and returns to the dark. We hike further and find the campfire pit.

The name of this exploration is the Starlight Snowshoe Hike and Fondue Tour, so the chocolate fondue and sky above filled with billions of beautiful stars are the only two things that aren’t a surprise. Selah Explorations isn’t a standard tourism outfit, they have a holistic approach to their trips that blends discovering the hidden treasures of the land with creative reflections on our heritage.

We start a fire and huddle around it, munching on strawberries we drag across plates brimming with chocolate. Jordie stands to face the group. He clears his throat and does what any well-bred Canadian would do on a freezing cold night in the snow; he recites The Cremation of Sam Mcgee. In case you forget (as I had) the classic poem recounts a poor soul from America who tried to tough it out in the Yukon but couldn’t beat the winter weather. After freezing to death he is cremated by his buddy in the hull of an abandoned boat. Jordie tells the story with such fervour and delight I swear the flames of the fire rise higher, the smoke swirling around his ruddy cheeks, transforming him for brief second into the flesh burned corpse of Mcgee calling out from the inferno to thank his friend for finally heating him up.

“Mom! Mom!” my daughter shakes my arm, snapping me out of the reverie. “Can I please lick my plate?” Chocolate fondue in an intoxicating addition to suspense-filled poetry and although I know they’ve all downed a lava flow of sugary fuel, I check my other two children to make sure they haven’t frozen like Mcgee.

Next we gather around a forest pine tree and decorate it with lit candles, while singing songs that take me back to my youth.  Laurie recounts a poem called the Walker of the Snow. It gives us the shivers (in a good way) as we pack up to head further into the night. We enter a great white field and decide to try calling out for coyotes. The adults and children whoop and howl then we stand in silence to see if they bark back. I sneak to the side and do a couple owl hoots too, just in case. We meet another traveller from the past, then trample down a long icy trail and finally find warmth and washrooms waiting for us back at the ski lodge.

On the way home my kids talk about how they’ll never forget this night. My only regret is that I didn’t find a foreign friend to bring with us. Exploring and surviving the winter woods with good people, good food and storytelling around a campfire is about the best gift of Canadian culture you can offer. ~Gillianne Richards