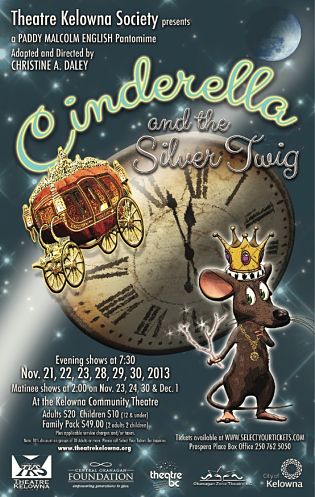 Months of concentrated effort will all come together next month when the magic of Cinderella opens at the Kelowna Community Theatre. Theatre Kelowna Society will present their annual Pantomime to kick off the Christmas season. The family friendly show will hit the stage November 21-24 and November 28- December 1.

Director Christine Daley has spent her summertime hours revising Paddy Malcolm English’s two renditions of her hit, Cinderella and the Silver Twig, originally produced in 1976 and 1989 by the club.

The Cinderella storyline remains basically the same but new characters play leading roles in bringing together Cinderella (Casey Wemp) and of course, the Prince (Graham K. Daley). Not to worry, the magic can only happen with the help of a ‘Fairy Godmother’ who, in this case, is disguised as an old Granny, Twig being her name, played by Gillianne Richards (Okanagan Life's Culturista), and the definite help of the special deputies in the audience Granny Twig calls upon.

Theatre Kelowna Society’s pantomime has been a starting point for many young enthusiasts and their families. Traditional pantos involve a cast of familiar characters as well as some stranger ones. Even talking Donkeys, singing rabbits, rapping fairies, and old disco Queens have been known to make an appearance. The theatre is a magical place where a knight in shining armour (or pajamas) can find his true love at the local farmers market, marry her and live happily ever after. But, with every love story comes someone or something that tries to destroy the fairy tale.

Cinderella and the Silver Twig is no exception. The evil Stepmother, Ms. Crosspatch (Corinne Marks) with the assistance of her bumbling, beautiful daughters and her niece try to thwart Cinderella’s attendance to the Royal Ball, the Royal Disco Ball actually.

The annual Christmas Pantomime just like the Nutcracker, signals the start of Kelowna’s festive season and has done so for decades. “It has been fun and exciting to direct Cinderella and the Silver Twig for Theatre Kelowna this year," says Christine. "But moreover, it has been an honour to present this Cinderella as I was mentored by Ms. Malcolm-English in 1976. Her vision of this Cinderella story remains the same.”

“Paddy always said the theatre is a magical place.” she adds.