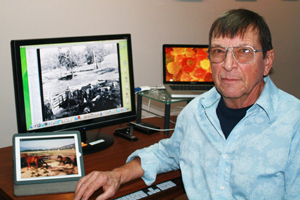 Doug Cox says it’s a hobby that has gotten completely out of hand. Although his books recounting area history have been local bestsellers for decades, as a child he wasn’t particularly interested in reading or writing. He was, however, blessed with a natural curiosity. “I travel with a camera in one hand and a tape recorder in the other,” he says. “I’m always asking questions.”

Doug’s enthusiasm for history was sparked while he was on the other side of the globe. He’d been touring the world (“it was the thing to do in the ’70s”) and while in South Africa he wrote home. His father wrote back, mentioning that Doug’s grandfather had spent time there during the Boer War. That led Doug to visit area museums, and he was hooked.

Still, when he came back to Canada to find work, history didn’t motivate his choice of location. He simply wanted to live near a good ski hill, and figured Apex was the best. But while living on a rural property in the Green Mountain Road area, he soon became aware of the region’s rich local history. “Some of the old-timers were telling me about the freight wagons and the stage coaches and all that,” he says, and soon he was collecting their stories —along with plenty of black and white photos.

This led to a long-term relationship with the Western News-Advertiser. For 18 years, he supplied them weekly with a photo and a story caption. In those days he often knocked on doors to ask for family histories; surprisingly, he says, people were usually delighted to invite him in, share their stories, and allow him to copy their photos.

Eventually it made sense to collect these into books. Okanagan Roots was first produced by the Western and Webco West Press in 1987, with an initial print run of about 3,500. Doug has reprinted the book twice under his own imprint, Skookum Publications, selling some 9,500 copies in total.

Okanagan Roots is just one of his many titles which document the early miners, ranchers and orchardists who settled and developed BC. Rodeo Roots was compiled for the 50th anniversary of the Keremeos Elk Rodeo, while Penticton Now, Then and Way Back When provides a 100-year photo history of  Penticton and area. Mines of the Eagle Country recounts the story of the Nickel Plate and Mascot mines. S.S. Sicamous, Queen of Okanagan Lake and Wagon Train over the Monashee illustrate how traversing the area was once a lot more complicated.

While in Hawaii a few years ago, he came across the story of thousands of head of cattle being transported from Hawaii to North America; hence his latest book, Hawaiian Ranching. Although he claims this book will be his swan song, Doug has embraced the digital age. Electronic readers allow him to produce his books with colour photos, and he has combined older titles into new editions.

Doug no longer knocks on doors. Instead, he has become an archive magnet, with people bequeathing him their collections. Today, his vast inventory presents a problem. “I am not an archivist,” he says; he knows where to locate specific photos, slides and interview tapes, but he’s looking for help cataloguing and storing these treasures—perhaps with digital copies to protect the collection against loss. ~Dawn Renaud