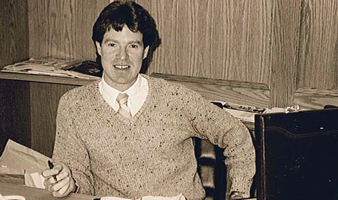 Do you remember who was on the cover of the first issue of Okanagan Life? If you don’t have that memory, you might be surprised to know that your brain most likely does.

In this instance, we can find out who was on the cover. In fact, 25 years of Okanagan Life memories can be tested, coached and adjudicated because we have kept copies of each issue. You could read about the Capozzi families, the Bennett’s rise to power, David Foster’s Okanagan connections, Duncan Keith’s hockey dream year, Jim Stewart’s cell phone conversation, Judy Tyabji’s baby, the results of 18 Best of the Okanagans and Best Restaurants or thousands of other stories. Such is the preeminent feature of magazines—because they are both tangible and permanent, we can go back and read them again.

Scientific studies are providing much evidence that conscious memory itself is pretty much an internal rumour. While we are exceptional at storing information, we are poor at retrieving it. When we look back, the moments we thought we knew do not return clearly; faces get switched, people deleted or added, names edited, locations misattributed and time itself, frozen in puzzlement. We are just beginning to learn how poor our memories really are and that mystifies us humans, because, well, ‘It is not how we remembered it.”

Even more mystifying and paradoxical is that new scientific studies are telling us that other regions of the human brain are not only incredibly powerful; they exceed our previously held beliefs, by orders of magnitude. How did Daniel Tammet memorize pi to over 22,000 digits and learn a new language in five days? How do people like actress Marilu Henner remember the vast majority of personal experience and events in her life? The answer is hyperthymesia and while you might forget the name, you must remember it exists.

Perhaps brain science is telling us that we are not that different from these savants and that in all likelihood, all human brains are capable of extraordinary tasks and memories, we just don’t realize it yet. New studies point to the amazing power of the visual region of the brain that records billions of memories, but unfortunately, stores them just outside our conscious awareness. Savants understand that these unconscious images drive most of our wants, needs and desires in life.

Unfortunately, there are many junk scientists making stuff up and that confounds us. The gap widens between true science and junk science with scientist’s apparent inability to explain scientific findings in a way that most members of society can understand. Perhaps the biggest barrier to bridging the knowledge gap is within each of us—our own individual reluctance to invest brain energy into trying to understand something new. Because our brains evolved by finding the easiest solution to any problem, not necessarily the best, we are all cognitive misers. We need to understand that the unconscious mind—is most of the mind.

So who was on the cover? He is in this issue, past issues and on our 25th anniversary wine labels! Your powerful unconscious probably knew, but your lazy, conscious self didn’t read the memo. ~ John Paul Byrne