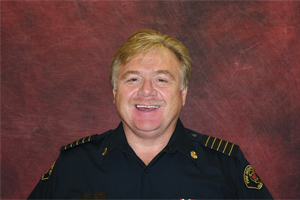 Kelowna fire chief Jeffrey Carlisle is a modest man despite his rich background. In a career that spans decades, he has transferred more than a dozen times and held every position from front line to chief. He moved to the Okanagan from Fort McMurray, Alberta, in April of 2008 to become Vernon’s fire chief and two years ago accepted the top post in Kelowna.

This forward thinking leader has been a firefighter since he was a teenager. “In 1974 I was recruited into the military,” says Jeffrey. “They had a list of occupations that your aptitude was suitable for and I picked firefighter. I was 17 years old and I did not know what I was getting into. By the summer of 1975 I’d gone through my apprenticeship training and for whatever reason, it just stuck with me. I couldn’t see myself doing anything else.”

When Jeffrey was 21, he went to Europe and stayed for five years. “It was an amazing education, to go into a foreign country to work.” Recalling all the transfers and positions over the years since, he adds, “Twenty-five years ago I never would have thought I’d be the fire chief in Kelowna.”

When Jeffrey retired from the military, he went back to school and earned his masters degree in leadership. Recently he spent three weeks in Australia teaching firefighters from Australia, New Zealand and Hong Kong. “I was coaching deputy fire chiefs and fire chiefs through a program that taught creating organizational change and the whole concept of contemporary leadership.”

Jeffrey lives contemporary leadership every day with his own crew. “The Kelowna Fire Department and the City of Kelowna are great,” he says. “They are very progressive and doing a fantastic job in a time when it’s about restraint and cutbacks. Council has a very difficult job and the city manager and his team do a great job.”

What Jeffrey loves most about being Kelowna’s fire chief is the people he works with. “They are an extraordinary group. I interviewed each of them when I started. I talked to them about what was important in their work. Openness and trust were extended to me right from the get go. There was a desire by everyone in the department to do better. These men and women are extraordinary; they do so much in the community.”

Last year Jeffrey applied and competed at the national fire academy for one of four spots in the Harvard fellowship program. He got an alternate slot, but is applying again this year. If accepted he will spend three weeks at the JFK School of Public Administration, participating in a program that brings together top leaders in local government from across the United States and Canada. “Just getting that network of those type of leaders gives you the resources you need when faced with any situation,” he says.

However, Jeffrey denies that his goal to participate in this program points to any political aspirations on his part. “I try to lead by example instead. In my network, I informally coach a lot of fire officers, not just in Kelowna, but folks I’ve been working with in the Okanagan. I can see myself doing more of that than being involved as a politician.”

For the present, Chief Carlisle is focused on leading an outstanding team at the Kelowna Fire Department. —Darcy Nybo