Wheels of our road bikes: If you’d seen it

Shelley shares the horror of a devastating bike accident that changes lives, and her outlook.

We climbed up through East Kelowna, then headed down the swooping corners of Spiers Road

My friend and I set out on our bikes just after dawn, hoping to beat the heat, hoping to have the busy streets mostly to ourselves. It was one of those flawless summer mornings, the wheels of our road-bikes seeming to cleave a perfect path between yesterday and tomorrow. The sky such an aching shade of blue it might be possible, after all, to ride forever.

We climbed up through East Kelowna, then headed down the swooping corners of Spiers Road towards KLO. My friend was just 100m ahead of me but I didn't see it happen. I came around a curve to find her face down in the middle of the road, her eyes unblinking, a pool of blood forming fast under her crushed helmet. A man in a brown pick-up had pulled off the road and was dashing over.

"Did you hit her," I screamed at him, my hands digging frantically for my cell phone.
No, he insisted, no.

He made as if to roll my friend over and I bellowed at him again. "Don't move her!"

A gas truck was speeding up Spiers towards us. "Go stop any traffic," I shouted, and I dialed 9-1-1.

I can't tell you how this story ends; my friend is still deep in the plot. Skull and facial fractures, a brain injury keeping her at home, holding her hostage to hours spent wondering how much of her mind and life will come back to her. Me, I'm unscathed, except for the indelible image of this first-hand horror: someone I loved unresponsive to my voice; so much blood flowing in the street you'd think the pavement itself was producing it.

Some people arriving at the accident buoyed my faith in humankind. A slim man who knelt beside us and told me he was a roadie too. A doctor who came along by chance and waited until help arrived. The man driving the gas truck that first barrelled towards us, who busied himself redirecting other cars and, when the ambulance finally pulled away, offered me a hug.

But the man in the pick-up, who said he didn't hit her. He didn't stay. He didn't have to answer the question again: did you hit her? So shocked and terrified by the scene around me, I didn't think to get his license, didn't think to ask him what he'd seen. Didn't make him wait. My friend has no memory of what happened.

Had she not been wearing a helmet she would have died.

These days I'm telling everyone this story. Telling this story is what I do instead of riding my road bike, because I'm too nervous to get back out there. In the past, I've feared falling and broken bones, losing wide swaths of skin. I'd never pictured just what a crash might look like, how it might change everything I thought I knew.

In the years I've been biking in Kelowna I've had drivers throw things at me, pretend to run me over, holler at me to get the hell out of their way. Why this animosity? If all the people cycling around town were to commute by vehicle instead, our traffic and resulting aggression would only be worse.

I can't help but think things would be different if everyone could see what I saw that day, and see what my friend is dealing with now. Drivers might stop texting, rummaging in purses, scrolling through playlists. They might think of roads as things to be shared. Cyclists, who aren't always blameless, might stay in their lanes, signal when turning, respect the rules of the road, and -- crucially -- distrust every other moving object. Because you never know. 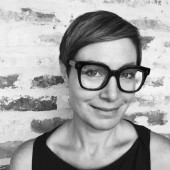