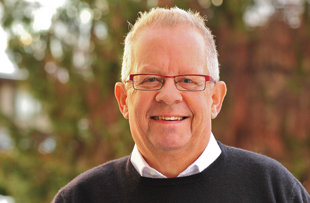 Pulling out a chair and waving his hand in welcome, Nigel Brown is the quintessential gentleman. Quietly gracious, his grey-blue eyes sparkle with humour, but from the moment he begins speaking, it’s clear this is a man who takes his mission—and his coffee—seriously.

“They have the best Americano in town,” he says of the very Italian Gio Bean Espresso on Water Street in Kelowna. A regular at the roast, Nigel begins many of his morning meetings here. On the agenda these days? The newly proven benefits of the old-fashioned sing-a-long.

Recently awarded the Queen Elizabeth II Diamond Jubilee Medal for his work with the Make-A-Wish Foundation in Vancouver, the determined do-gooder is putting his expertise into action as executive director of the Kelowna Silver Song Club (SSC).

“The research coming out of England is incredible,” Nigel explains, referring to Canterbury Christ Church University studies showing that seniors who sing together, heal together. Prone to ailing health, falls, depression and loneliness, older participants in community based music activities are thriving. They report more joy, less stress, an increased sense of belonging, not to mention better memory, fewer doctors’ visits, better motor skills, fewer medications, and an overall improvement in physical and mental health.

Such research led Nigel’s brother, Stuart, a high level opera singer, to initiate the Sing For Your Life Foundation in 2005, resulting in the establishment of some 60 Silver Song Clubs in the southeast of England.

Inspired by his brother’s success and excited about the benefits to participants, Nigel got to work. With support from the Central Okanagan Foundation, he launched a pilot project in West Kelowna in 2011, the first of its kind in Canada. Along with his partner in life and enterprise, communications consultant Jill Hilderman, the couple ran six monthly sessions, open to individuals 65 years and older.

Seniors sang, snacked and socialized, free of charge. “When the participants first arrived, their mood was a little low,” says Nigel. “As they sang, their mood greatly improved. They felt like better people.”

The project was so popular, the positive outcomes so convincing, the couple secured federal funding from the New Horizons Seniors’ Program, allowing for two more Okanagan-based clubs to warm up their voices.

“If we can ward off depression and dementia, we can change people’s life experience,” says Nigel.

Further funding is his biggest obstacle. While trusts in England support Sing For Your Life, Nigel says it’s an uphill climb here in Canada. “The programming is only as effective as the number of times it’s used. We’d like to offer it weekly or even biweekly, but we don’t have the means right now.” He’s hopeful word will get out and a harmonizing of financial resources and eager participants will result. “We’re determined to do things in a credible way. We’re nonprofit but we’ve built a legitimate board of six members. Jill and I put in more time than we’d ever be paid for, but seeing those happy faces makes it all worthwhile.”

Highly organized, the SSC’s learning outcomes include evoking memories, stimulating fine and grand motor skills, encouraging interaction and shared performance, as well as offering free choice and multicultural material where appropriate. Singing has been shown to raise oxytocin (a feel good hormone), lower cortisol (a stress hormone) and increase melatonin and the infection fighting immunoglobulin A.

“The sessions are particularly helpful for those aging in place, sometimes on their own, sometimes with a caregiver. Those individuals tend to be lonely, not mixing with friends. By getting them out, getting them active, we’re improving their overall lifestyle. They’re laughing, chatting, telling stories,” says Nigel.

SSC sessions are guided by professional instructors and encouraged by volunteers ranging from youth to the Sweet Adelines. Nigel’s goal is to spread the song, eventually establishing SSCs in other cities across the country.

He may have some scales to climb but Nigel is no stranger to the challenge of raising his voice. “We had hurdles with Make-A-Wish. At first we thought we’d take the siblings of sick kids until a family with 11 kids showed up. We learned as we went.”

If he can get sick kids to Disneyland, surely Nigel can get seniors to sing—and rally supporters to listen.

To learn more about Silver Song Club, including dates and locations for meetings, contact Nigel Brown at nigel@sing4yourlife.ca. ~Shannon Linden