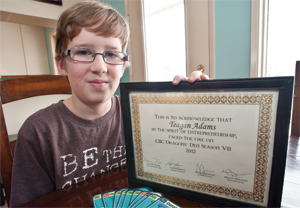 Dragon’s Den tough guy Kevin O’Leary was a bit hard on 10-year old Teagan Adams, but as Teagan sees it, O’Leary “wasn’t as bad as I’ve seen him before.” Teagan had even written a jingle to sing on the show. When he finished the song, O’Leary jokingly advised him “not to quit his day job.”

Teagan appeared as the youngest-ever (10 at the time), pitch artist on the nationally syndicated show last fall when he attempted to get the Dragons to kick in 30 grand toward his Doogoods project that helps to raise funds for school building projects.

Four of the Dragons eventually gave him $500 each and Arlene Dickinson also threw in an hour of marketing consultation.

Even without a big cash infusion from the program, Doogoods has sold more than 250 card packages in person and over the Internet.

With the help of his mother, Chantelle, the Anne McClymont Elementary School student developed the trading card game (Doogoods) to teach social responsibility to kids.

Billed on www.doogoods.com as a way to “start a new trend by making kindness cool,” each card pack consists of 30 cards with Doogood characters on them. The characters give players a challenge to do good individually or as a family. Games are also aimed at the classroom. The educational package comes complete with lesson plans.

Doogoods isn’t a concept exclusively for charitable ends. Teagan developed his program as a real business where he covers his costs and takes a small income. But, 20 per cent of total sales goes to social projects.

The idea was to help in fundraising for the school building program organized by Free The Children. So far game sales have raised enough to build a school in Kenya ($9,000) and a good start ($2,000) for a new school in Nicaragua.

Internationally renowned social activist Craig Kielburger is the inspiration for Teagan and his younger brother Tate, who also works with Free The Children to provide funding for clean drinking water. When Kielburger addressed a crowd of 60,000 at GM Place last fall, he hailed Teagan and Tate as important contributors to the Free The Children mission.

Teagan designed the cards and helped his mother develop a website for the game by writing most of the copy. He also writes for their monthly newsletter offering tips on how to make a difference.

“Lots of kids like Pokémon and trading cards,” the youngster says of the game. “I came up with the idea around Christmas 2011 and mom helped me developed it.”

It wasn’t Teagan’s intention to make something specifically for Dragon’s Den, but the family were fans and watch it weekly. When the show’s producers announced auditions in Kelowna, Chantelle ushered him down to the studio.

That was in February 2012. The call came to fly to Toronto for a taping at the main CBC studio in April.

The Adams family lived in Osoyoos at the time (dad Justin has since become vineyard manager at CedarCreek Estate Winery) and Teagan had never been to such a large city.

After meeting the show’s cast and taping his 20-minute segment, which aired last Halloween, he toured the city. His reaction to the whole experience? “It was better than Disneyland.”—Bruce Kemp