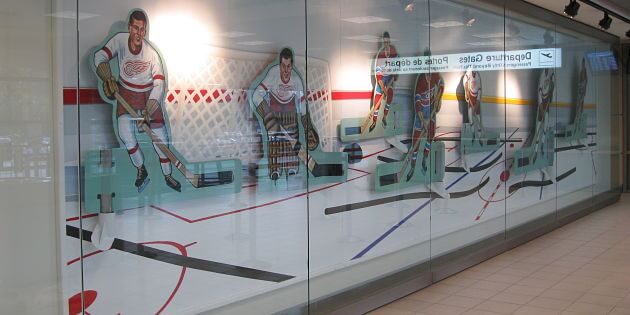 A new installation created by Penticton-based artist Glenn Clark pays homage to Canada’s national game, and will fascinate travellers making their way towards the departure gates at Kelowna International Airport (YLW). Clark's Best of Seven will be on view until May 5, 2014.

Remember when you were a small child and everything seemed so much bigger? Clark’s piece will stir those feelings once again with his larger-than-life depiction of a vintage table hockey game that was played by moving players on long metal rods.

Visitors will find something familiar in the artist’s nostalgic look back, which includes depictions of the vintage jerseys of two teams of the NHL’s original six, the Montreal Canadiens and the Detroit Red Wings. Best of Seven recalls a time when hockey players did not yet wear helmets, the goalies had no face guards, and even the equipment was simpler or not even there.

Using paint on plywood to create a trompe l’oeil ice rink, Clark puts the airport visitor right in the centre of the action, and his painted sheet-metal players created in various sizes give the impression of spatial recession. His scaled-up puck, made from an inverted cereal bowl, is the finishing touch.

Glenn Clark was born in 1959 and grew up in Kelowna. He studied art at Okanagan College in Kelowna, then completed a BFA at the University of Calgary in 1991. He currently lives and works in Penticton, BC.

The  gallery at the Kelowna International Airport is a satellite of Kelowna Art Gallery.
kelownaartgallery.com