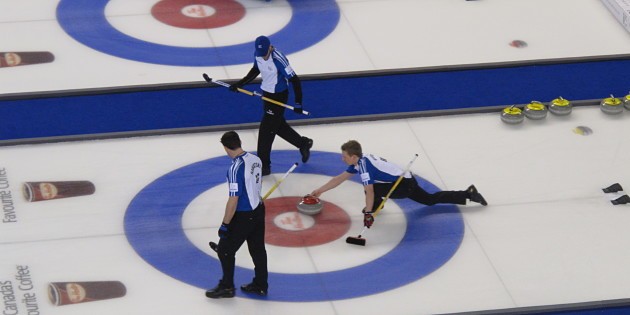 History will be made on Saturday afternoon at the Scotiabank Saddledome when Team Canada steps onto the ice for its inaugural game at the 2015 Tim Hortons Brier.

The Calgary-based team of third Pat Simmons, second Carter Rycroft and lead Nolan Thiessen captured the 2014 Canadian men’s curling championship in Kamloops, B.C., 12 months ago to earn the right to become the first Team Canada in Brier history as the defending champion.

After skip Kevin Koe left the team, the remaining three recruited fellow Calgarian John Morris to skip the team, and that lineup will make its Tim Hortons Brier debut in Saturday’s opening draw at 2:30 p.m. against Manitoba’s Reid Carruthers.

Morris is a two-time Tim Hortons Brier champion and 2010 Olympic gold-medallist (all while playing third for Alberta’s Kevin Martin), while Rycroft and Thiessen both won two Brier titles with Koe.

Koe, meanwhile, will be skipping his new team (third Marc Kennedy, vice-skip Brent Laing [throwing second rocks], lead Ben Hebert) at the Tim Hortons Brier after winning his fourth Alberta championship over the past six years. Koe will face off against his former teammates in the highly anticipated Battle of Alberta on Tuesday, March 3, at 7:30 p.m.

For Morris, it will be the record-setting fourth set of colours worn by a player at the Tim Hortons Brier. He’s previously represented British Columbia, Alberta and Ontario. He had shared the record of three with his father Earle (Quebec, Ontario and Manitoba) and Ryan Fry (Manitoba, Newfoundland/Labrador, Northern Ontario). 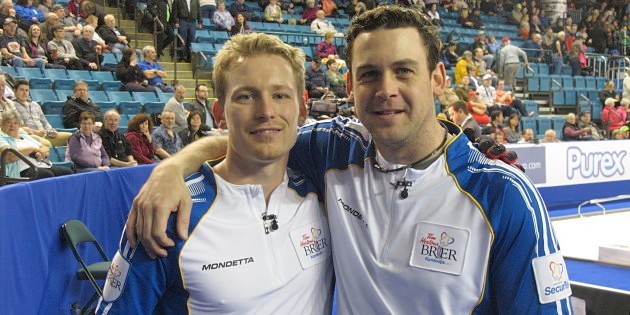 Welcome Back Cotter & Team BC

Last year’s runner-up — B.C.’s Jim Cotter (who had Morris calling the game and throwing third rocks last year) — will also be in the hunt for a playoff berth at the Scotiabank Saddledome with his team from Vernon/Kelowna.

Jim Cotter will be taking a fifth shot at the Canadian men’s curling title. Cotter and teammates Ryan Kuhn, Tyrel Griffith and Rick Sawatsky (Ty & Rick pictured above) downed Dean Joanisse in a 7-6 extra-end victory in the final of the provincial playdowns, Feb. 8 in Vernon.

The 2013-14 season was the most successful of Cotter’s competitive career. Throwing fourth stones, with Morris at skip, he was the runner-up at the two biggest events of the year: the 2013 Tim Hortons Roar of the Rings Canadian Curling Trials and the 2014 Tim Hortons Brier. 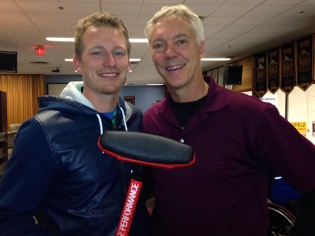 When Morris left the team in the off-season, Cotter moved back to skip and recruited Kuhn at the third position. Kuhn was a member of Canada’s 2000 world junior men’s championship team, playing second for brother Brad.

Earlier this week, Okanagan Life caught up with Ty Griffith & Coach Pat Ryan at the Kelowna Curling Club as they prepared to head to Calgary.

More experience is provided by the likes of 2006 Brier champion Jean-Michel Ménard of Quebec, who finished fourth at the 2014 Tim Hortons Brier with his Saint-Romuald quartet.

Carruthers, meanwhile, advanced to his first Tim Hortons Brier as a skip by taking down the country’s hottest team in the Manitoba championship, beating Mike McEwen in an all-Winnipeg final.

Coming out of Saskatchewan is Saskatoon’s Steve Laycock, a former world junior champion who is currently sitting fifth on the Canadian Team Ranking System (Jacobs, Gushue and Carruthers are second, third and fourth respectively, behind the leading McEwen foursome).

It will be the fourth time the Canadian men’s curling championship has been played at the Saddledome (curling capacity approximately 19,000 seats), and the seventh time it’s been played in Calgary. In all three previous Saddledome Briers, Alberta teams prevailed: Martin in 1997 and 2009, and Randy Ferbey in 2002. Calgary previously played host in 1948, 1961 and 1980.

The 1997 Brier featured the single-game attendance record for the event: 17,024.

The 2015 Tim Hortons Brier will mark the 11th year of title sponsorship of the Canadian men’s championship by Tim Hortons.

It will be the 86th renewal of the Canadian men’s curling championship. Alberta has played host to the Brier on 13 previous occasions since the event’s inception in 1927. The Brier has been played in 31 cities across Canada, from Victoria to St. John’s. Manitoba has won a leading 27 Briers, while Alberta is just one back with 26.

Team Canada is joined in the main draw by the 10 teams with the best combined records in the previous three Briers, meaning Nova Scotia, Prince Edward Island and the Yukon will play off for the 12th and final berth. Nunavut declined an opportunity to participate.

TSN/RDS2, the official broadcast partner of the CCA’s Season of Champions, will provide complete coverage of the Tim Hortons Brier, leading to the gold-medal game on March 8 at 6 p.m.

The winner of the 2015 Tim Hortons Brier will represent Canada at the Ford World Men’s Championship, March 28-April 5 in Halifax. 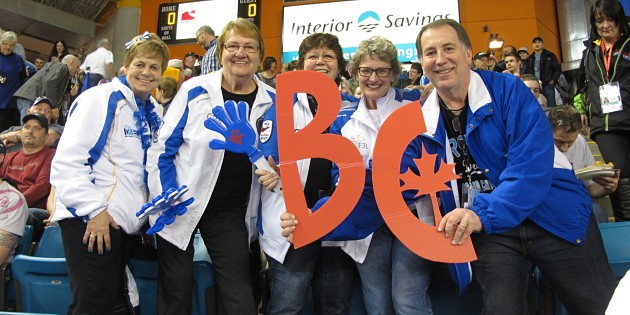 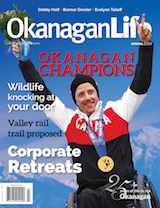 Okanagan athletes put it all on the line at the 2014 Sochi Olympic and Paralympic Games—we’re so proud! Our Spring issue features Paralympic Champion sit-skier Josh Dueck on the cover and a feature on Corporate Retreats in the Okanagan Valley. What happens when Bambi moves into your neighbourhood?  Download the issue to view our feature on Wildlife Worries.