Spirit of the West, Barney Bentall to headline at Gold Medal Plates 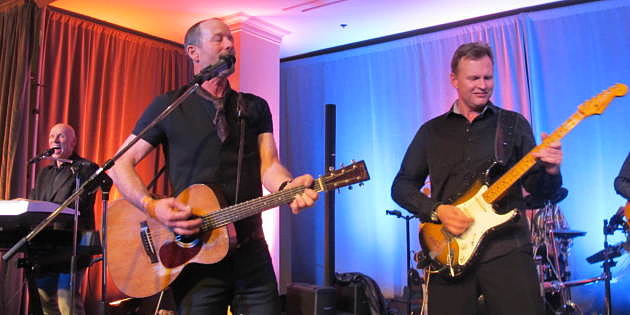 The 2015 Canadian Culinary Championships is pleased to announce that Spirit of the West front men John Mann and Geoffrey Kelly will join band member and guitarist Matthew Harder and Canadian pop/rock legend Barney Bentall as the featured performers for the thrilling culinary Gold Medal Plates finale on February 7. The musicians have performed in some of the cities across Canada at the regional Gold Medal Plates events and are not only big supporters of the event, but are passionate about the cause it supports.

“We are so proud to bring together this star-studded cast of performers, athletes, and chefs to celebrate the spirit of achievement,” says Stephen Leckie, CEO and Co-Founder of Gold Medal Plates and the Canadian Culinary Championships. “All three competitions over 2 days in February to place Canada’s top chefs on the podium, are wildly exciting. To top it all off, our Kelowna audience gets to meet the competing chefs, each with a fire in their belly, and be entertained by some of our country’s best musical talents. It’s like a grand bazaar of Canadian gilded excellence. And it is so much fun that it’s easy to forget that the whole endeavor has raised 8.2 million dollars and counting for Canadian Olympic Foundation, in support of Canadian Olympic athletes.”

Barney Bentall is equally delighted about the teaming-up, saying, “I am excited to once again be a part of the Canadian Culinary Championships in Kelowna. I am particularly thrilled to be performing with members of Spirit of the West. Geoffrey, John and I go back over 30 years! John has gone public regarding his struggle with early onset Alzheimer's. I have been performing with John lately and his courage and grace have been very touching and inspiring. So is the love and support of those around him. I also never get tired of the time I spend with the Olympians. Their dedication to what they do never ceases to amaze me! But, more than sport and strumming, this event is about crowning the new culinary champion. There is plenty of spectacular food, stellar wine and many a good time! See you there.”

Gold Medal Plates’ winning chefs from 11 Canadian cities, coast to coast will compete in the ultimate contest to crown Canada’s #1 Chef in February, 2015. The Grand Finale of Gold Medal Plates (the Canadian Culinary Championships) is a national project celebrating Canadian excellence in food, wine, sport and entertainment. Net proceeds from Gold Medal Plates ($8.2 million to date) are given to the Canadian Olympic Foundation which supports Olympic athletes and high performance programs such as Own the Podium. Kelowna is now home to this prestigious Canadian competition for the next 6 years.

The Canadian Olympic Foundation is a national charitable organization that generates support to meet the technical, scientific, medical and coaching needs of Canada's athletes across all Olympic sports. Proceeds from Gold Medal Plates are given to the Canadian Olympic Foundation to support high performance programs such as Own the Podium. To learn more about the Foundation and the programs it funds, please visit www.olympicfoundation.ca.

For further information on the event and tickets visit www.goldmedalplates.com