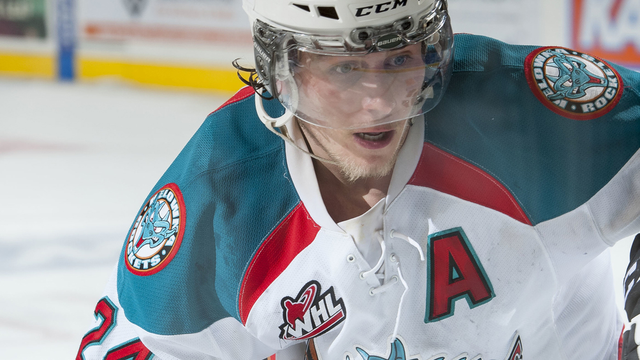 Tyson Baillie is returning to Kelowna to rejoin his teammates for the opening of the WHL regular season this weekend. The Kelowna Rockets will face off against Kamloops Blazers.

"It was a great experience," said Baillie of the Sharks' camp. "You quickly learn how quick the pace gets and how much stronger the players are at the next level. Overall I thought I did a good job and I'm looking forward to the start of the season."

Baillie, who doesn't turn 19 until November, rejoined his team with a few days of practice before the Rockets home opener on Saturday.

Defenceman Dalton Yorke was also returned to the Rockets by San Jose Tuesday after being invited to camp while goalie Jackson Whistle is back in Kelowna after attending the Young Stars in Penticton with Vancouver.

Tickets for the Rockets home opener Sept. 20 vs. Kamloops are available through www.selectyourtickets.com

Photo courtesy of the Kelowna Rockets.