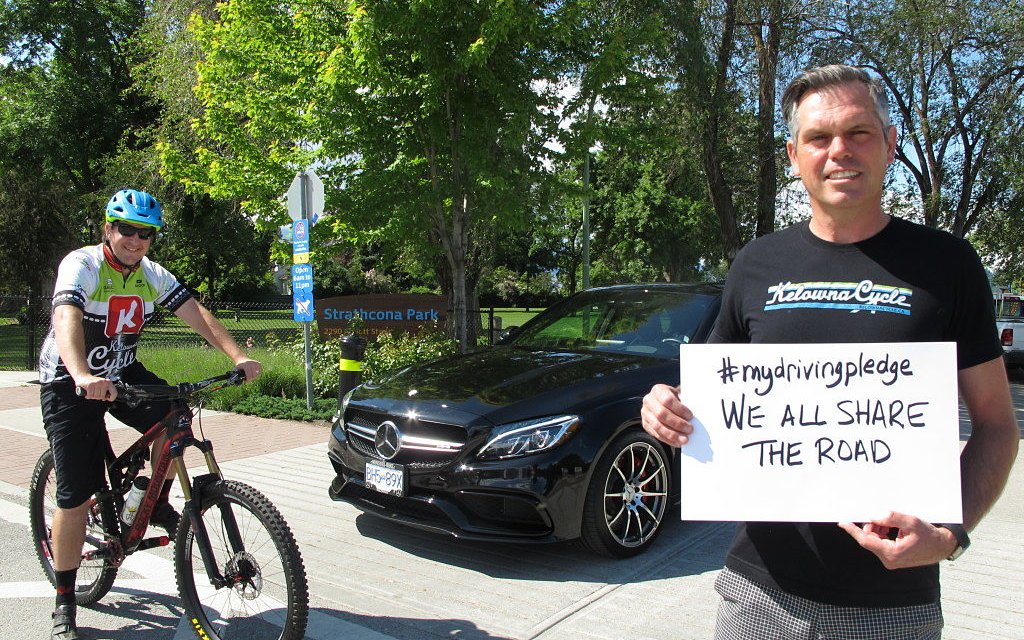 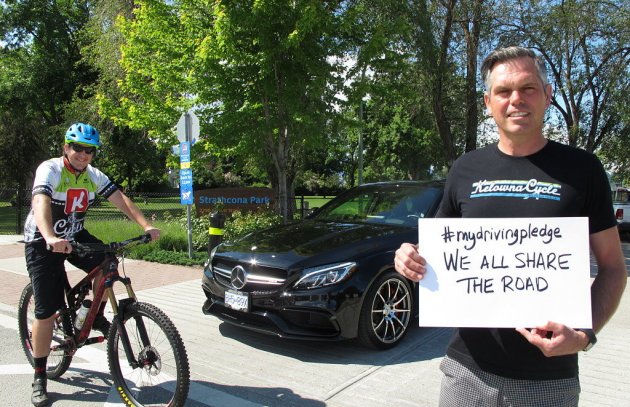 A group of Kelowna businesses has come together to keep Kelowna’s roads safer, launching an online pledge and contest at mydrivingpledge.com.

Distracted driving is becoming a higher risk every year for residents in the Southern Interior. These local businesses are hoping the incentive of winning a “safe driving” prize will motivate drivers to pledge to make Kelowna roads safer.

“If we don’t see a change in driving patterns, this year we’ll see more than 30 people die in a fatal crash because someone picked up their cell phone when at the wheel,” says Pat Rosen, owner of Kelowna Cycle, who has made it his priority to be an advocate for safer roads.

ICBC reports an average of 140 injured cyclists in car crashes each year in the Southern Interior.

“We all share the road,” reminds Rosen, whose offered up a $500 gift certificate to his cycle store as a pledge prize.

Failing to yield the right of way is one of the leading causes of crashes that result in injuries or deaths (ICBC Statistics). Intersections are hot spots for crashes – they’re busy locations where cyclists, pedestrians and vehicles need to cross paths and share space.

ICBC named Harvey and Spall Road as the number one crash intersection in the Southern Interior.

“As Kelowna grows and our streets get busier with more people driving, cycling and walking around the city, it’s important for everyone to take a moment to think carefully about safety,” says Mayor Colin Basran. “People need to educate themselves about the rules of the road and commit to follow them.”

The prizes to spur involvement in making the pledge are valued at just under $2,000. The Valley’s leading insurance company, Capri Insurance, is offering up a dash camera that can provide footage of an accident related claim. Andre’s Electronic Experts has donated a Bluetooth compatible Kenwood audio deck and Kelowna Performance Collision a travel voucher. Kelowna Mercedes Benz is also putting its weight behind the driving pledge by offering a luxury Taylor Made golf bag.

The driving pledge comes in advance of the new fines for distracted driving. Beginning June 1, a first offense will cost drivers $543 in financial penalties. Kelowna RCMP is also in the midst of a rollout of new distracted driving scopes, capable of spotting drivers who may be texting or on the phone from up to 1.2 km away.

Last year during May long weekend enforcement, RCMP in B.C. handed out 199 tickets for using an electronic device while driving.

“You’re five times more likely to crash if you’re on the phone – is just not worth a life,” says Rosen. “We’re hoping by making the campaign makes a real difference in making roads safer for all us.”

Winners will be chosen before the July long weekend. Drivers can share safety messages at mydrivingpledge.com until June 28.