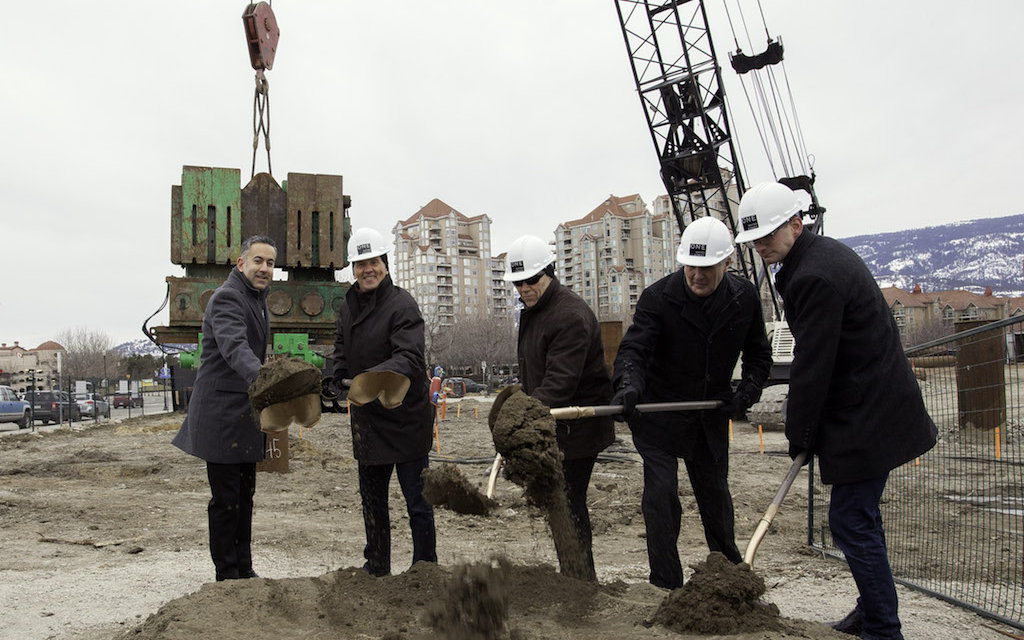 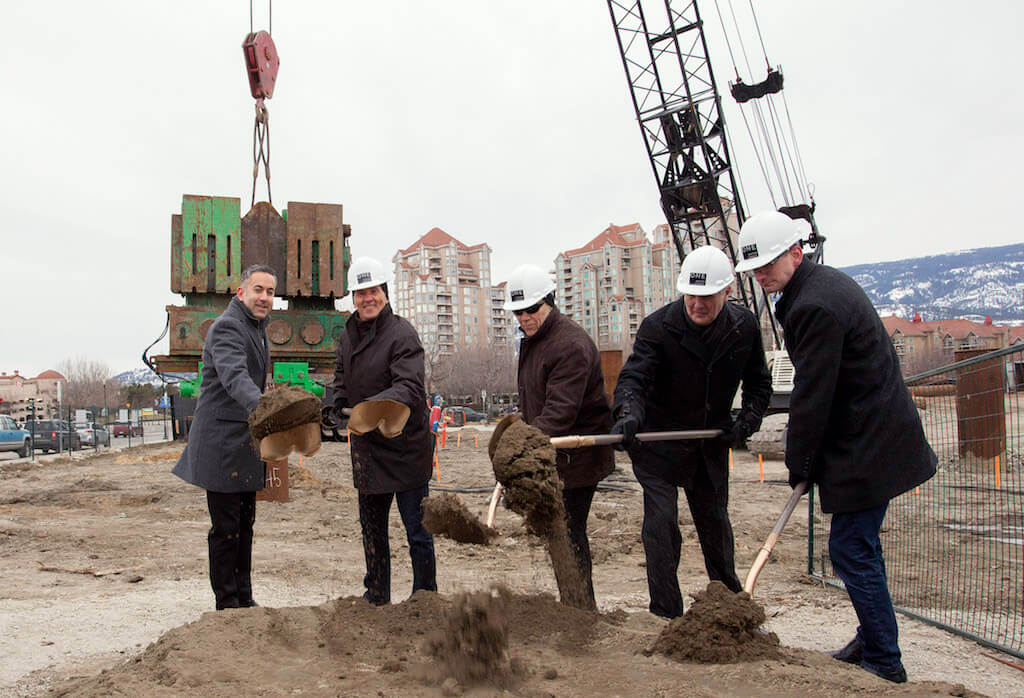 Mayor Colin Basran of Kelowna (left) loads his shovel dirt to officially launch the development of One Water East Tower in Kelowna Joining in is Henry Bereznicki and Russ Watson of North American Development Group and Bill and Leonard Kerkhoff. Photo by Sproing Creative.

Construction has commenced on the 36-storey East Tower at ONE Water Street in downtown Kelowna.

Kelowna Mayor Colin Basran threw the lever that started up the heavy equipment that will imbed the piles into the ground for the East Tower’s foundation.

“City Council is committed to encouraging urban centre development that is energized by a concentration of new residents and businesses,” said Mayor Basran. “ONE Water Street is the latest and biggest project to address our objective to have more densely developed urban centres, whether that’s downtown or in any of our other urbanized neighbourhoods. This project is a beautiful example of placemaking, with its proximity to parks, the lake and the Cultural District and we are excited to see this bold vision take shape.”

In addition, the developers North American Development Group and Kerkhoff Construction announced a “Kick off the Count”program marking the start of construction with a pledge to JoeAnna’s House. The Kelowna General Hospital Foundation is raising funds for JoeAnna’s House which provides a place to stay for out-of-town families when loved ones are getting treatment at KGH. ONE Water Street’s developers have committed to donating one dollar for every foot of pile used for the East Tower’s foundation.

“It’s important to remember that community-building is part of the reason we’re here today, and that there are so many others in Kelowna who contribute in their own way,” Leonard Kerkhoff, vice-president of Kerkhoff Construction told the gathering. “We’re very impressed with JoeAnna’s House and the work they do, so when the piling’s done, we’ll count up how many feet of piles actually get used and we’ll be pleased to make the donation.”

With the East Tower of ONE Water Street already approaching a sell-out, the developers have announced a planned earlier start to the sale of homes in the 29-storey West Tower. 190 homes have been sold in the 36-storey East Tower since October.

“The majority of the East Tower’s one and two-bedroom homes sold quickly and given the excess demand generated, we are pressed to release more of these homes as planned for the West Tower,” says Henry Bereznicki, managing partner of North American Development Group (NADG). “There is also impressive demand for sub-penthouses and penthouses in this unique urban-style, luxury high-rise development."

At 36 and 29 storeys respectively, the two glass and concrete towers at ONE Water Street will be the tallest residential towers between the Lower Mainland and Calgary.

The presentation centre for ONE Water Street is located at 1001 Manhattan Drive (corner of Manhattan Drive and Sunset Drive) and is open Mondays through Saturdays from 11 am to 4 pm.