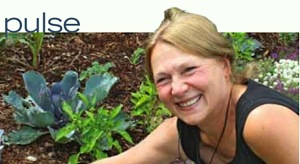 Take a peek over the fence at a certain house on Penticton’s Martin Street and you’re likely to spot a considerable amount of produce growing among the flowers. This is, quite literally, tasteful landscaping. Peer over the back fence; on what was once a large expanse of simple lawn, you’ll see several large rustic wood bins overflowing with everything you need for salad, salsa or a stir fry—including the seasonings.
What’s with this large-scale produce production, smack dab in a downtown residential neighbourhood?

Donna Benson explains while she shows me around, pausing frequently to crouch down and exclaim with delight over a cucumber or a pepper. “I could flippantly say, because of pain and laziness,” she says: the house is her place of business, but because she lives in Naramata, watering restrictions meant maintaining the lawn was quite a nuisance. One day as she drove past the nearby soup kitchen, she thought about their need for fresh produce and the light bulb came on. She could make better use of the yard and solve her watering woes at the same time.

Unlike most yard renovations, this makeover happened on a shoestring. “I phoned someone at Home Hardware I knew and said, I have this idea, would you be able to donate some stuff, and he said yes,” says Donna. “Then I called Jack at Superior Peat, and he donated the soil, and then P&E donated the wood, which I think looks gorgeous.”

She’s referring to the bark-covered strips sliced from the outer edges of logs, a lumber production by-product, which create the raised beds in the back yard. She’s right; they are gorgeous. For labour Donna relies on a small army of people who simply enjoy weeding, watering, and watching things grow, most of whom don’t have a place of their own to do it. A friend at Penticton Area Cooperative Enterprises thought it would be a perfect fit for some of their clients; better known as PACE, the organization provides skill development opportunities. PACE participants pitch in with Donna’s other volunteers, like Martha—who’s on dialysis three times a week, but still finds time to put in a few hours every day. “It’s really all about the volunteers,” insists Donna, who’s amazed by their enthusiasm and commitment. “It would not be possible without them.” The volunteers assure me that they love it, too; one says it’s addictive, and he understands why farmers farm.

Much of the food that’s grown on this city lot ends up at the food bank. Fresh, nutritious produce is a welcome addition to the hampers, and Donna says it helps fill an alarming gap. “They’re short 10,000 pounds of food; 10,000 pounds. With all this around us, it’s ridiculous.…You see wasted land. I mean, we have everything here…” She crouches down to cup another vegetable. “Oh, look at that little green pepper,” she beams, then grows serious again. “The thing is, how do we mobilize all these resources to make things happen?”

Donna had little experience with growing vegetables, and was grateful for the expertise provided by the Penticton Urban Agriculture Association—an organization that is dedicated to “mobilizing those resources and making things happen.” The PUAA has teaching gardens in downtown Penticton where they share practical knowledge about planting, pest control, composting, growing organically, and more. Various members also volunteer to host sessions in their own gardens and share their experience. 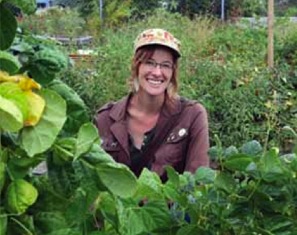 Jennifer Vincent, a former PUAA board member, showed me around their teaching garden on Nanaimo Avenue, dubbed C.URB—the Centre for Urban Agriculture. Community support is obvious: growing bins are scraps from lumber yards and pallets repurposed from the now-defunct Canwood furniture manufacturing plant; irrigation equipment was donated by Grower’s Supply and Home Hardware; mulch is free from the Campbell Mountain landfill; and people have donated gardening tools and implements, now housed in a small shed. “It was a bit of a community project to build that,” says Jennifer.

Through a project the PUAA calls Sharing Land 4 Food, they also act as a matchmaking agency to connect people who would like to garden with those who can provide the land (it’s up to the landowners and labourers to figure out how they’ll share the wealth). Last year the PUAA’s teaching garden and related programs contributed more than 400 pounds of produce to the Soupateria and the local food bank.

Want to get involved in a tasteful landscaping project? Find out more at puaa.wordpress.com. —Dawn Renaud