Rumours of my retirement have been greatly exaggerated.

Story and photo by Deborah Greaves 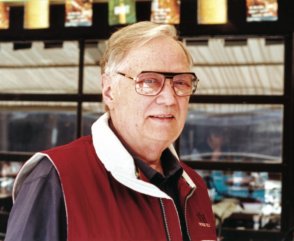 Thomson loves his work, and his print-media documentation of the comings, goings and achievements of Okanagan business and industry is just a portion of what he does. He’s known throughout the Okanagan Valley for his ongoing and consistent quest to promote the region as a great place to live and do business.

John Thomson’s career as a business writer began here in this publication, on the pages of Okanagan Business magazine. He arrived in Kelowna in 1989, not as a journalist, but as a public relations representative for B.C. Tree Fruits and Sun-Rype. Though he’d been in public relations and advertising for years, he’d long wanted to write. He started with Paul Byrne in the early days of the magazine as a business columnist, then as editor of Okanagan Business.

Later, Thomson began writing “The Thomson Report” for the Kelowna Daily Courier, commencing a lengthy and positive relationship with the Okanagan business community that became part of the fabric of the Valley. Included in the tantalizing weekly dialogue was a column segment called “Rumours and Things.”

“Ironically, I built up trust with those rumours,” Thomson says. “In reality, those rumours were hints of activities or events to come that were just a step away from official announcement. People could trust me to wait until the right time to let the community know.”

A young-at-heart 70, Thomson has plenty of energy and is anticipating new projects.

He manages the John Thomson Group, the Media Marketing Club, and John Thomson Presents, which started in 1995 and organizes eight events a year with high-profile guest speakers. The Media Marketing Club, now 229 strong, hosts regular working luncheons with guests from the fields of marketing, and P.R., and costs just $35 per year to join. Another enterprise is an Executive Round Table, a once-a-month breakfast group of 16 execs who enjoy in-depth discussions with specially invited guests.

“I’ve always worked at taking the positive approach,” Thomson says. “I’ve found the positives even in the negative issues and situations. There are plenty of ups and downs in business as in life, and you have to be prepared always for that challenge. There is nothing in this world of ours today that will not change.”

Thomson thoroughly enjoys mentoring and looks forward to adding more business-related projects to his slate. Not only are the rumours of his retirement exaggerated, he says, but the R-word is not in his vocabulary.

“I plan to keep right on going,” John Thomson says. “Why stop working when you enjoy yourself as much as I do?”