In person with Linda Edgecombe 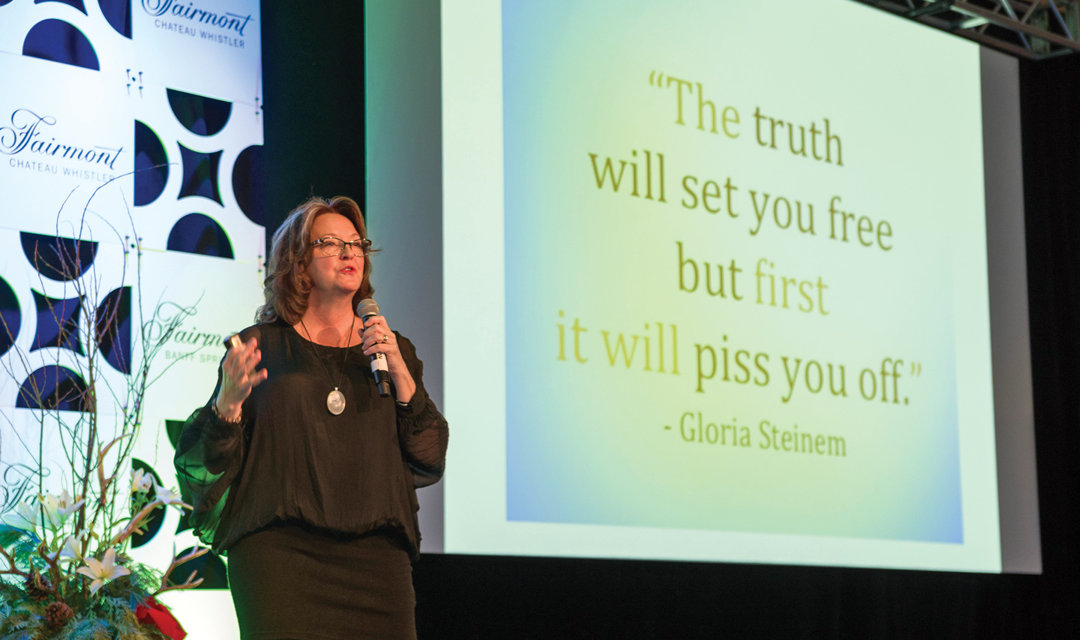 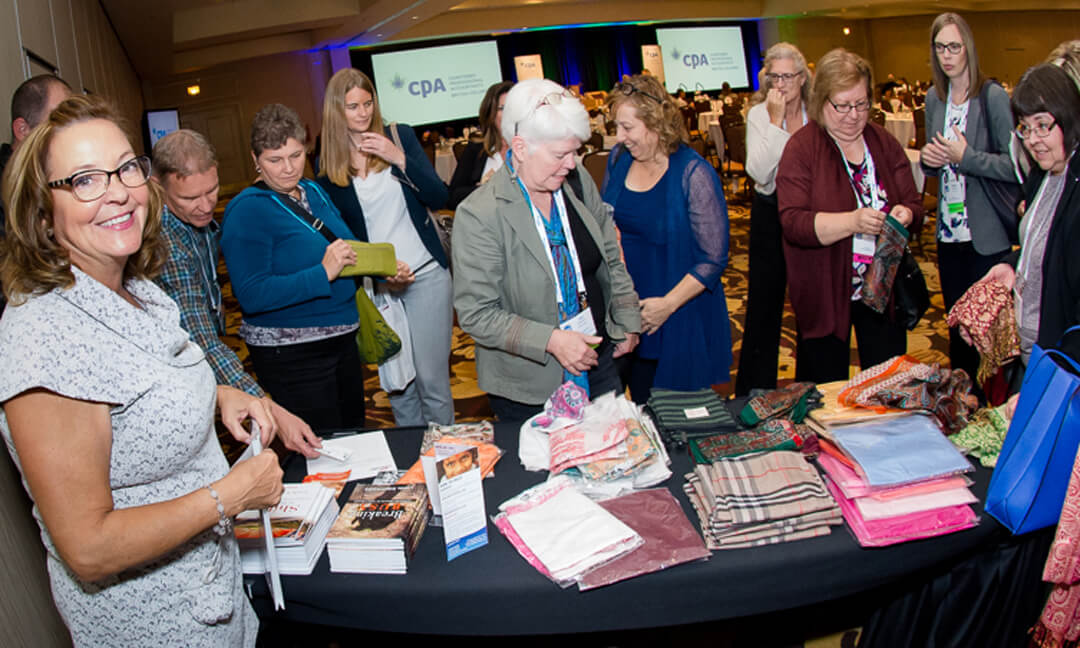 Choosing a slice of the planet

For Linda Edgecombe it’s one scarf, one book, one girl

The edgy feminist, parks-staffer-turned-speaker and author from Kelowna, Linda Edgecombe, admits she has a competitive streak.

“I like being good at what I do, but I also have a belief system that I’ve adopted that seems to bode well for me: there is lots for all of us.”

Linda has seen the inside of many a posh hotel as she travelled across the country, the US and to international locales for speaking engagements. Hotel banquet rooms are a far step away from the woods for this Edmonton-born woman who started her career in the parks department.

Participation, a program that launched her speaking career (and encouraged Canadians to get healthy by getting active since 1971) is also Linda’s mantra. In her words, we should all choose a slice of the planet.

For her, the speaker circuit is a mini version of being in the big entertainment business. “I’ve had my own concierge in hotels; I’ve had makeup in the green room; I get paid well—they even give you a thank you gift.

"The only way we will eradicate poverty on the planet is with education."

“All the groups I stand in front of are privileged. But with privilege comes responsibility, so I call it ‘choosing a slice of the planet.’ I don’t care what slice it is, how big it is or how small it is. Ours is a small little slice of Nepal.”

For the past 12 years, Linda has sold scarves at every event she has presented at, raising money to rescue marginalized girls and women in Nepal. More than 20,000 girls between the ages of seven and 16 live in bonded servitude. The Her Foundation has since given out more than a thousand scholarships, and educated more than 1,200 mothers in literacy and numeracy skills. 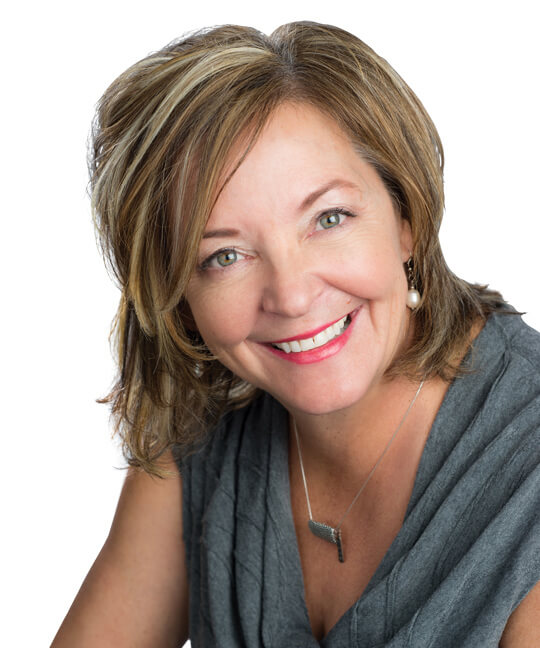 About three years into selling scarves, husband Kevin purchased her a ticket to travel to Nepal. In her forties at the time, she had never been to a developing country before. “In my head, I’m thinking, ‘aah!’ I don’t think I could handle it because I’m a princess and I love a good thread count. My world is the Hyatts and the Westins of the world.”

Eventually, the Edgecombes flew to the Dang district, making what Linda calls ‘the best decision I’ve made for the planet.’ After a 10-hour trek from the airport, Kevin took his first look at the overcrowded schools and exclaimed, “I’m a builder. We have to build some classrooms.”

He took on the role as head of the Foundation’s board of directors and Linda stayed in fundraising—and storytelling.

Now in her 26th year speaking, Linda says audiences don’t remember the points you try to teach, but they do remember the stories.

“So the scarf thing, I’ve just weaved it in,” she says.

Linda both talks and walks what she calls an “alive” life.

“Giving back is a part of that. As we age, most of us get to a place of having checked off a lot of boxes, in our career and family, but in that place, we feel something that is like a gnawing, like something is left undone.”

For most of her career, the same workplace issues have emerged.

“In the beginning, we called it stress management; that was really a hot topic. And then for many years, we talked about work-life balance. That’s still a very hot topic.”

You’ll find some of the inspiration (and wry humour) she shares on stage in her books, Shift or Get off the Pot and Breaking Busy. (She’s offering a free download on her most recent book on lindaedgecombe.com)

“Often our self-doubt and our inner voice kick in. And so that’s the fascinating part for me: how do you walk through self-doubt and self-sabotage and noticed when you’re doing it? 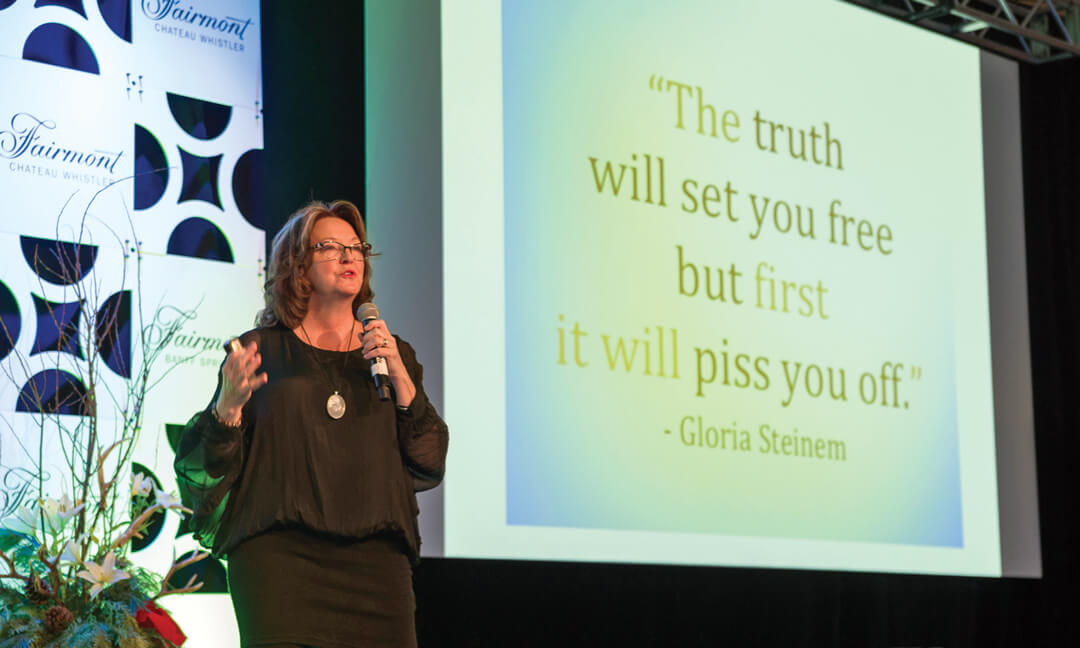 “I talk about how challenging it is to lean in — but it’s such a beautiful thing to be able to do that, and have your own ‘aha’ moment. How do you find some space just to be? How do you actually move your body every day? How do you become less angry and start forgiving?”

Since its inception in 1995, only 27 speakers have been inducted into the Canadian Speakers Hall of Fame, and Linda is one of them.