Giving Others a Boost 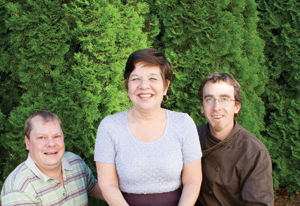 At the end of a gorgeous summer afternoon I pass through the entrance to Heaven’s Gate. Guided by a couple of smiling volunteers I squeeze into the winery’s jam-packed parking lot, then make my way to the patio where I spot a tiny dynamo darting purposefully among the guests: Dianne McEvoy, a rental property manager and member of two strata councils, owner of Falcon Business Services Inc., and founder/facilitator of icton 16 Steps to Discovery & Empowerment. All this, and somehow she still had the energy to co-found a new community initiative, Giving Others A Boost (GOAB).

Dianne has a knack for bringing like-minded people together. Participating in a Community Futures entrepreneurial program, she met David MacCoubrey, owner of Sirf Web Marketing Strategies, and Gregory Fuchs, private chef with Gregor’s Gourmet. On one of their breaks the three talked about how they might continue to support  each other. “A few days later,” she says, “I came back to them and said that there were a lot of entrepreneurs like us who could probably use some support and promoting, and maybe we could look at doing a networking event of some kind.”

With plenty of other networking opportunities around, Dianne says the trio has worked hard to make theirs unique. Each event showcases three local entrepreneurs or small businesses, plus an artist, a photographer or writer, and a musician. “We also bring in a small, locally owned winery that provides free tastings of four of their wines and we generally have a chef who prepares three special hors d’oeuvres.”

Today’s chef is GOAB co-founder Gregory Fuchs. Inside the winery, a fabulous spread awaits—Greg’s delectables plus treats from the Twisted Tart, with wines served by our host. I help myself to a few goodies, check out a vibrant display of watercolours by artist Derrie Selles, and head back out to the patio. Enjoying the soothing guitar and vocals of the Corner Turtles, I look over an information display for the South Okanagan Victims Assistance Society (SOVAS).

GOAB is more than a mini trade show in a relaxed social atmosphere. In keeping with their mission of giving others a boost, Dianne, Greg and David donate the proceeds from the cover charge ($20 with advance confirmation) for each event to a different charity; today, the beneficiary is SOVAS. Amberlee Erdmann, the organization’s resource development coordinator, tells me they were thrilled to be selected. Although their funding generally goes to programs, she explains, not operational costs; their fax machine recently broke down and she’s hoping today’s donation will cover a new one.

Although this is only the sixth bimonthly event, GOAB has already donated $2,170 to five local charities: Pathways Addiction Resource Centre, Penticton and Area Women’s Centre, South Okanagan Women In Need Society, South Okanagan Therapeutic Riding Association, and the Gathering Grounds Café, which tries to support those in the community who are falling between the cracks. “We held our second event there,” says Dianne, who hosted the first in her home—a venue they quickly outgrew.

The group eventually hopes to establish office space (probably sharing the space and a receptionist) and produce a quarterly newsletter to further raise their profile. And as GOAB grows, they plan to offer more: workshops on anything from health and fitness to Facebook to organizing; competitions for artists and writers, and a Canadian Idol-style competition for singers; a networking membership alliance with discounts; even a charitable foundation. They’re looking for a corporate sponsor to match each event’s donation, and these matching funds will be kept in a separate account to be distributed by a board representing several charities and non-profits. It will be a foundation of last resort for those with a worthwhile cause, Dianne says. “If a person needs money and they’ve exhausted every avenue, they’ve gone every place they can possibly go to to get the money and still can’t, they can apply.”

On September 29, in celebration of its first year, GOAB will host a gala celebration at the Seniors Drop-in Centre on South Main Street in Penticton from 5 p.m. to 11 p.m. Like other GOAB events it’s open to the public, but this one features a full buffet dinner supervised by a Red Seal chef, entertainment provided by several musicians, and (hopefully) wines from GOAB’s six featured wineries. “We’re hoping to sell out,” says Dianne. Tickets are $55 (advance only).