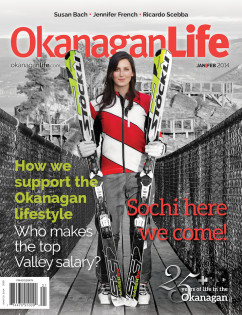 An Okanagan Life Magazine cover story on World Champion ski cross racer Kelsey Serwa is creating an Olympic buzz as Kelowna, Vernon, Penticton and residents across the Okanagan Valley get ready to cheer on local athletes at the Sochi 2014 Olympic Games.

The World Champions Kelsey Serwa is one of 12 Okanagan athletes in line to join Team Canada at the Sochi Olympics in February and the Paralympic Winter Games in March.

Serwa competed in the 2010 Vancouver Olympics and could be podium bound in Sochi. Last February she won the World Cup in Sochi and in 2011 captured both the World Championship and X Games titles. Since 2009 she has earned 13 World Cup podium finishes. In men’s snowboard cross Kevin Hill from Vernon will race for Canada.

Also poised for a medal is Vernon’s Justin Dorey, a competitor in the new Olympic sport of freestyle halfpipe. This judged sport takes place in a sloped channel of snow where athletes are evaluated on amplitude and style as well as the diversity, difficulty and execution of the tricks. Dorey currently leads the World Cup standings. He will be joined by teammate Penticton’s Matt Margetts who is also in the top 10.

The final six members of Canada’s Olympic freestyle ski team will be named January 27. Vernon’s Noah Morrison, a freestyle slopestyle athlete is in the running.

Perhaps two of the most well-known athletes are NHLers Duncan Keith and Shea Weber who brought home gold for Canada in 2010.  Sicamous-born Weber has been named as alternate captain for Team Canada. In 2010, Weber was second among defencemen in scoring with two goals and four assists and was named to the media all-star team. Sidney Crosby will be the captain for Team Canada.

See the full list of Okanagan athletes bios in the Sochi Cheering Guide.