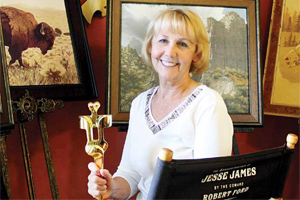 Janice Blackie-Goodine is thrilled that her next project, Flicka, is shooting in the Okanagan. She recently returned to Summerland after several months filming Twilight in rainy Squamish. A talented painter, Janice realized the movie industry could be a practical career choice. She says it was tough getting in: “I was the first woman in Alberta working in film in any capacity other than hair, makeup and wardrobe.” Early in her career she worked with some of the best in the business, earning an Oscar nomination for her first western, Unforgiven. Passchendaele, “the most demanding film I’ve ever done,” earned her both a Genie and a deeper understanding of our country’s past.

To source items for sets, Janice deals with local retailers, fabricators and random strangers. She’s knocked on doors to offer new trash cans for old and cash for a farmer’s pig-chewed troughs. “That’s half the charm of what we do,” she says. “It is a lot of fun.” While it’s Janice’s job to make movies look picture-perfect, she still enjoys watching them. Good thing: each year, as a voting member of the Academy of Motion Picture Arts and Sciences, she views 50 to 60 movies in just two months. Janice also continues to paint, recently branching out from her western theme to tackle Okanagan landscapes. —Dawn Renaud