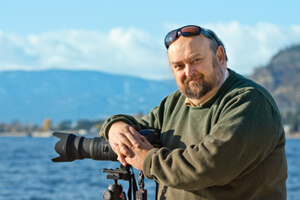 A bit of madness went into the cover of Gifts of the Okanagan, a new photo book by Laurie Carter and Bruce Kemp. With printer deadline looming, the pair were desperately seeking a cover image when Bruce was caught in the mother of all storms driving home after shooting the clay bluffs along Highway 97 (pictured in the book).

As he drove north through Summerland, Bruce noticed the storm was moving faster than his car. An experienced photographer, he kept a watchful eye on the changing light once favoured by the British painter J.M.W. Turner. Bruce stepped on the gas to beat the storm to Antler’s Beach, in Peachland, the only photo op along the highway. 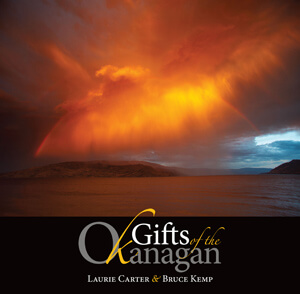 While the sane were secure indoors against the storm, Bruce was setting up his tripod on the beach. A good Samaritan stopped and asked if he was OK. “He looked at me like I was crazy,” says Bruce who waved the passerby off.

Wind howling, Bruce only had minutes to get off eight frames before the storm disappeared. “I knew I had something right away,” he says. And no, the photo has not been altered in Photoshop or any other software.

As for the images inside the book, Bruce credits Laurie for the lion’s share. “It’s her book,” he says, “I kind of just filled in.” She was the one who picked the photos from his collection. Bruce says he’s not a landscape photographer; his Okanagan contribution is people, sports and the occasional animal that was “silly enough to flop in front of me.”

Bruce has made his living as a shooter, scribbler (his word) and editor, and he wouldn’t have it any other way. “This job has let me do something different every day of my life.” An award-winning photographer and journalist, his freelance work has appeared in newspapers and magazines around the world.

He started his career in Ontario “bumming around small town newspapers” and then went to The Banff School of Fine Arts to study photography. He returned to Ontario and was sitting in a barber’s chair (back when he still had hair) when he was offered a position at a local college to teach photography. “I absolutely love teaching,” he says. Bruce feels indebted to the guys who taught him and an obligation to share his knowledge with other people, which he now does at Okanagan College. 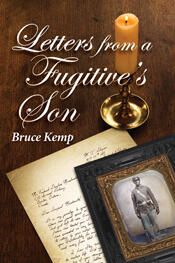 When he’s not teaching and travelling the world for print media Bruce has been busy penning the historical novel, Letters From a Fugitive’s Son. A story set in the period that witnessed blacks fleeing slavery in the United States and escaping to Canada (1835 to 1865). Bruce grew up near the terminus of what is known as the Underground Railroad and got hooked on the story after doing research for an article. Released as an eBook, Bruce is already thinking of his next novel. More on Bruce at www.c2cMedia.ca.—Karen Slivar