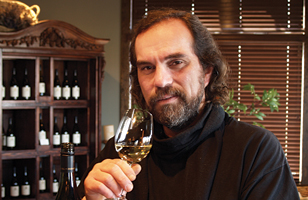 A hill overlooking Kelowna International Airport may seem an unusual site for an estate winery, but for Dutch native Richard Kamphuys and his wife Jitske, it’s a perfectly sensible spot to grow quality grapes and make fine wine. When the couple first immigrated to Canada in 1992, they bought the property that then hosted a 19-hectare apple orchard. “We were seeking a change from a big city environment,” Richard says. After running the orchard for a few years, he learned that it had been a vineyard in the 1940s. Although the bitterly cold winter of 1949-50 severely damaged the young vines and ended the venture, grapes had been growing on this land as far back as 1930, when the Rittich brothers planted vinifera vines in the district. They reported the results in BC’s first wine book, European Grape Growing in cooler districts where winter protection is necessary, published in 1941. With oversupply pushing apple prices down, Richard decided to assess the feasibility of grapes and wine. He took courses at Okanagan College in Penticton and in 2005 planted 27,000 vines in a 6.4-hectare vineyard. “The west-facing slope catches the sun from 8 a.m. to sunset, which is just right for the correct varieties,” he says. Richard selected early ripeners like Lemberger and Pinot Noir, recommended by the Rittichs, as well as Pinot Gris, Gewürztraminer, Zweigelt and Baco Noir. Opened in 2011, the old-world winery, designed by Penticton-based architect Robert Mackenzie, includes a bird’s-eye view of the airport. ~ Michael Botner