The games are coming to town. About 500 athletes aged 12 to 15 (plus their coaches), representing 37 cities from 13 countries, will be descending on Kelowna from Jan. 26 to 31, 2011, to compete in the International Children’s Winter Games.

Veronika Dimova, originally from Bulgaria, won’t have far to travel for the games. Last year her family moved to Canada. You wouldn’t know it when talking with her that she only learned to speak English a year ago. An avid skier, she has been cross-country skiing since she was in Grade 2. She was surprised to learn the International Children’s Winter Games were coming to Canada.

A seasoned competitor at age 12, this will be her second international competition. She has 29 medals to her credit.

“Want to try my best, giving it my all for me,” says Veronika. 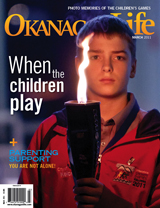 To get ready for these games she is practicing three days a week up at Telemark, in West Kelowna. This might sound like a lot for this Rutland Elementary School student, but it’s nothing compared with when she lived in Bulgaria near the trails and skied every day.

It was her mom, a cross-country skier herself, who prompted her to give it a try. “I really liked it,” say Veronika.

Although recognized and sanctioned by the International Olympic Committee, these games are not about breaking records and winning medals, these games are about fair play and fostering a better understanding among youth of different cultural backgrounds.

The first ever games were held in 1968 in Slovenia, with the participation of teams from nine European cities. The games were the inspiration of sports instructor, Metod Klemenc, who had a vision to promote peace and friendship to the world’s youth through sports. In the history of the games there have been 44 summer and four winter events. This marks the first time the Winter Games have been held outside Europe.

The International Children’s Winter Games will see youth compete in alpine and Nordic skiing, snowboarding, figure and speed skating, curling and hockey. Over 600 volunteers will be on hand to help with a variety of functions including competitions, transportation, food services, ceremonies and operations.

Be sure to check out the games and cheer on the youth. Karen Slivar