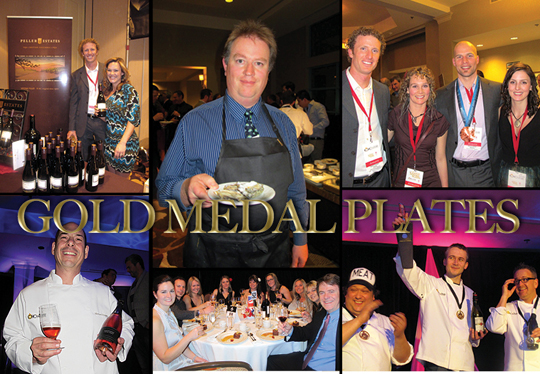 “Are you looking for a fishmonger?” calls out Jon Crofts, co-owner of Codfathers Fish and Seafood Market in Kelowna. It’s the eve of the Canadian Culinary Championships and Jon has been hoping all night that the mystery wine, feature element of the first leg of the competition, will be white—and he’s in luck. While the competitors won’t know it until 24 hours later, the bottle is an Old Vines Riesling from Chateau des Charmes in Niagara (although many mistake it for the Okanagan’s own Tantalus Riesling).

Match the Wine—Feed the Multitude

Jon’s call is answered by Anthony McCarthy, Saskatoon’s top chef, and it parleys into an early morning purchase of ivory salmon. Jon has sourced the fish from Vancouver Island where its diet of seafloor creatures rather than shrimp makes the spring a white rather than pink colour.

With only $500 in his pocket and facing the first challenge to feed 350 people and perfectly complement the wine, Anthony ops for the flavour-rich belly rather than the fillet. 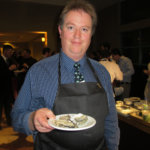 “The chefs are looking for value for their dollar, searching for what gives them the most flavour per pound,” says Jon. “The prairie chefs are used to nose-to-tail eating, and I’ve already gotten some smart questions about fish collars and bones.”

The fishmonger’s wares feature prominently among the majority of chefs. Ling cod for Edmonton’s Jan Trittenbach, squid for Toronto’s Jonathan Gushe, and the people’s choice for the first night, Marc Lepine’s langoustines served with puffed wild rice and Granny Smith apple, orange zest and lemon rind to pair with the citrus notes in the wine.

The culinary championships are intense and the heat is turned up during the second leg of competition. Hosted at the Okanagan College Culinary Arts School, the black box event comes to split second timing.

Each chef has 60 minutes to open the box, review the ingredients, decide on a menu, prepare and plate two dishes  for the 12 judges. 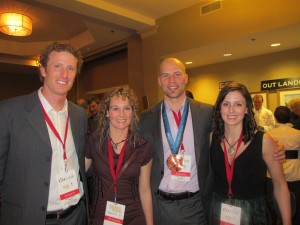 Spectators for the event include Olympians Kristi Richards and Scott Frandsen. Own the Podium, the program supporting Scott’s bid for a second Olympic medal at the 2012 London Games and that helped Kristi and fellow Kelowna atheletes, skicross racer Kelsey Serwa and bobsled bronze medalist Chris Le Bihan, compete in the 2010 Vancouver Games is the beneficiary of the two-day competition that pairs the country’s top culinary talent with its top athletes.

Kristi, a world mogul champion and Summerland native knows focus is a key aspect of competing.

“When I’m at the starting gate, I just let the thoughts go through my mind and pick the one I need,” she says. “You need to be ultra-focused, able to block out all the clutter to get the job done.”

Scott, who claimed his silver medal in rowing, puts his trust in training.

“If you get caught up in the moment too much, if you overthink it, it becomes more than it is and that’s when you can slip up and have a bad performance,” he says remembering the 2008 Beijing Games start. “We train so hard day after day to do what we do, when the gun goes for the race, the idea is that you need to go and do that, and that will be enough.”

Kristi sees the culinary and athletic connection as a perfect fit. In her teens she worked at Sumac Ridge, with Okanagan Valley wine pioneer Harry McWatters, and at Quail’s Gate with Marc Taylor, one of the country’s top sommeliers. “I definitely have a passion for food and wine,” she says.

In the black box kitchen, you can see the parallel with high performance sport where Kristi says, “the best prevail under any situation.”

When the boxes are opened each chef finds goose breast from Ottawa’s Mariposa Farms, steelhead trout pulled from Lake Diefenbaker in Saskatchewan, Le Rassembleu blue cheese from Quebec and Manitoba wild rice, which at it best takes the better part of an hour to cook. Most mistake the white root vegetable for parsnip, but the creamy purée created from parsley root (sourced from Calgary) satisfies the palate in the same way.

The most mysterious ingredient is a jar of cloudberries or, as Newfoundland chef Mike Barsky and others from Atlantic Canada call them, bake apple. 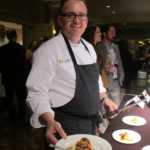 The wild rice gives but a moment’s concern to BC’s Rob Feenie, head chef of the Cactus Club in Vancouver. He pops it into the deep fryer and puffs it up for use as a garnish. He sears the goose breast, tops it with shallots and panko crumbs and lays it next to a rich purée of parsley root and blue cheese and a second of spinach. On the trout, he uses citrus juice to cure the fish for a melt-in-your-mouth experience.

The palates of the 580 people attending the gala banquet later in the evening are also satisfied at the BC chef’s station. Following a starter shot glass of duck broth, his rabbit and duck duo result in a savour sampling of rabbit presse and a miniature sausage of rabbit and foie gras coupled with carrot pearls, carrot purée, carrot paper and black truffle jus.

“The king of mushrooms is the truffle,” says Rob, who selects an Okanagan Haywire 2010 Pinot Noir to match his meal. “When you think pinot noir, you think of mushrooms. Both come from Burgundy, the home of the pinot noir grape.”

“Taken from the vineyard in Oliver, grown in a high mountain setting, the wine has acidity and a lively flavour,” says Christine Coletta owner of the Okanagan Crush Pad at Summerland. “It’s very young, but has nice cheery notes and an earthy tone, including the sage that grows in the area.” 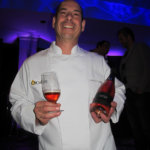 Pinot Noir isn’t the only Okanagan wine shining on this night. Winnipeg’s Michael Dacquisto steps out with Gray Monk’s Odyssey Rosé Brut. “Everything goes great with a little sparking wine,” he laughs. “We had fun with it, creating little pearls of wine caviar to complement the real caviar.”

He brought a trio of deep-fried pickerel fins, pike mouse and whitefish caviar. 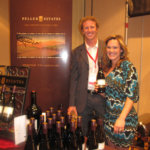 Another crowd pleaser is Peller Estates Private Reserve 2009 Syrah paired with pulled beef chuck wrapped in venison, thanks to the talents of Edmonton’s Jan Trittenbach. But for the judges, the best paring of the night is Anthony McCarthy’s duck creation teamed with a Nichol Vineyard 2007 Cabernet Franc-Syrah.

The wines of the Similkameen Valley also join the show, taking centre table for the dessert and auction segments. The judges pick a 2009 Syrah from Orifino as best wine of the night.

At the wrap up, Ottawa takes gold, BC captures silver and Montreal carries home the bronze, but the real winners are Scott and his Canadian teammates who will have the financial support they need to take their talent to the top of the podium.

Story and photos by Yvonne Turgeon