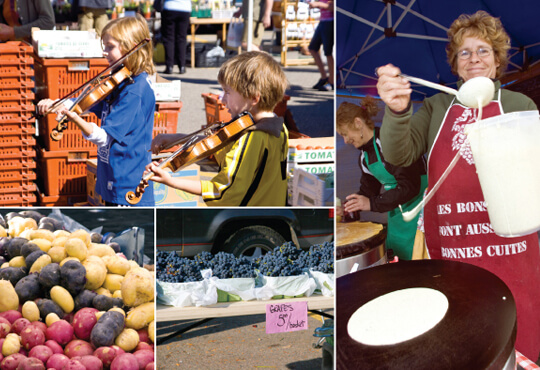 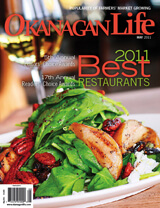 When I first moved to Kelowna I didn’t see any people I knew on the street and not being a mall-ee, there was only so long I could sit in a restaurant on a Saturday morning before waitresses started giving me the “move-along” look. Ditto for coffee shops. Then one Saturday the boss and I went winging down Springfield behind the Orchard Park Mall and I almost snapped my neck checking out the encampment of multi-coloured tents and trucks. I recognized it right away and it was like coming home.

The size of the Kelowna Farmers’ and Crafters’ Market amazed me. Compared to the city’s population base, the market is huge with more than 350 day and seasonal vendors offering their produce and wares. At the height of the season as many as 6,000 shoppers and tourists will flood the temporary laneways on a Saturday morning.

Among those shopping is Waterfront Restaurant and Winebar’s executive chef and sommelier, Mark Filatow. The three-time gold medal-winner uses as much locally grown produce in his menus as he can. He believes that “what’s picked today, tastes better today.” On it’s website, the Waterfront lists a number of suppliers that market shoppers will recognize. Among them, John and Lois Cox, owners of Sweet Life Farms.

John is probably the most highly recognizable denizen of the market. He’s the guy in the big, white cowboy hat selling potatoes. Every week, he drives down from Westwold with a two-ton truck loaded with up to a dozen different kinds of spuds. There are redskins, Yukon golds and potatoes that are purple through-and-through. Root vegetables are a specialty of his 50-acre farm. 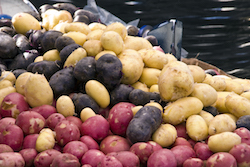 John’s produce is in demand at the market and for restaurant kitchens. Several wineries and golf courses are now courting him so they too can include Sweet Life taters on their menus.

Clients get territorial over John’s potatoes. “A couple of years ago, I had a crop failure and the customers wouldn’t believe me when I limited them to only one bag per customer to make sure there was enough just to go around…. You know you can promise those chefs the world, but in the end you’ve got to deliver.” And that’s what he’s been doing since his early college days.

John grew up in Oregon and attended college in California in the 1960s where he got into the early farm-to-table movement. What he saw then is the same thing he is seeing here in the Okanagan in the new millennium. Farmers were getting pushed off their land in favour of residential real estate development.

The solution in California was to offer the remaining local farmers more opportunity. “We set up markets all around town so a farmer could come down with a three-ton truck instead of a two-ton and sell produce at four different market locations making the trip profitable,” says John. “That’s going to have to be the thinking soon in Kelowna. We could set up four markets in the greater Kelowna area—one in Rutland, one in the Mission, one on the Westside and the original one here in Kelowna. That way the farmer could make a good profit.”

It was a hard slog during the first years of the market. John and Lois first set up their stand when it moved to the parking lot of the Orchard Park Mall, 18 years ago. Then the biggest challenges were the Russian and Ukrainian ladies who were among the market’s first clients.

“There weren’t many producers here. There was Mikey from up on the bench and a few others. We used to get these little old Ukrainian and Russian ladies come by asking how much you were selling for. When I told them 25 cents a pound they would offer me a nickel a pound and tell me how bad my potatoes were and really beat me up. Times have changed.”

John is one of the market’s biggest supporters. “I think the Kelowna market is the biggest in BC and the most diverse. Pretty soon Orchard Park is going to be too small and we’ll have to move. It would be nice to have a permanent space like they do in Kansas City (Missouri) or the new one in Halifax.”

The Kelowna Farmers’ and Crafters’ Market really is getting big. According to manager, Bob Callioux, new vendors must now go through an approval jury comprised of himself and three board members to be accepted as seasonal vendors.

But farmers get top priority. “Every farmer that calls and qualifies gets right into the market,” he says. This way the market can keep the mix of producers, concessionaires and crafts people working in favour of food producers.

If any philosophy drives the market and the delicate balancing act of vendors, it is the idea of fresh food produced locally. According to Bob, this isn’t an easy sell to North Americans (although they are coming to realize how appealing an ideal it can be), but it is the way many new Canadians grew up shopping and prefer to continue because they are used to it.

“The first thing they (new Canadians) look for is a market like ours. So this is helping to change the face of the market. We have more new ethnic vendors selling East Indian foods, German meats and breads; Ukrainian perogies, Chinese and other Asian vegetables.”

Last year, for the first time, one farmer began selling live turkeys in the fall for Thanksgiving and Christmas delivery. You can’t actually put a leash on your bird and walk away with it, but there is a floor model to inspect and the farmer will deliver a fresh, oven-ready gobbler to you a few weeks after taking your order.

Quality standards at the market are a top priority. A market on Saltspring Island received some bad press when the health board told them they could no longer sell homemade jams and preserves. But Bob says this isn’t a problem here in Kelowna because of strict adherence to health regulations. “Everything is inspected except prepared or cooked meats. We don’t have any fresh meat vendors here (all the meat offered for sale is frozen) and preserves are closely looked at.”

Bob also underscores qualifications for use of the organic label. “A farmer has to prove he doesn’t use sprays, pesticides or herbicides and that his products meet all the requirements before he can say they’re organic.”

Even buskers have to prove they’re capable of the job. There’s no formal competition for a busking spot, but Bob and other board members visit the different street performers during the day to check out their acts.

A lot of people come to the market just to eat. On Wednesdays office workers from nearby businesses come to enjoy their lunch hour with foods like French crepes that they wouldn’t or couldn’t make at home. Right now the overall mix of the market’s 300 plus vendors is 45 per cent farm products (fruit, veggies, meats, poultry and cheeses); 30 per cent concessionaire food and 25 per cent artisans.

This makes for an exciting mix. Add the buskers, face painters and balloon artists and you don’t just have a market, you have a tourist destination where busloads of camera-toting visitors from Alberta offload to enjoy a Saturday or Wednesday morning.

When I first encountered the Kelowna Farmers’ and Crafters’ Market, I was like all expats (even in our own country), grasping for something familiar—some kind of comfort food for the homesick soul if you will. I grew up going to the local farmers’ market in my hometown and the farmers/vendors were the parents of many of the kids I went to school with. Eventually those kids became the vendors themselves.

That dynamic didn’t change much when I moved to the big city. Most people think metropolitan centres are as far from our agricultural roots as you can get, but nothing is further from the truth. Big cities, especially those with rail or marine links, have always had lively boisterous markets selling everything from produce to cheap lingerie. London has Covent Garden, which is still a market as well as a tourist destination. Paris had Les Halles, which was torn down in a fit of urban renewal and condo development much to current chagrin of Parisians. But, Avignon, in the south of France, invested heavily in a new Les Halles and the investment is paying off big time.

Farmers’ markets need not be old and venerable. Halifax opened it’s newest market last August. The Halifax Seaport Farmers’ Market gives Nova Scotia farmers an outlet for their wares and it promotes green building at the same time. The market, located right on the waterfront, is powered by wind generators and solar panels, and sports a green roof (planted with indigenous grasses) and a living wall.

Toronto has two great markets, not counting the Asian markets that have sprung up over the past three decades, but local farmers’ markets. The St. Lawrence Market is one of the oldest in the country and features butchers, fish mongers, fresh fruit and veg vendors along with housewares, peameal bacon on a bun and some of the best buskers anywhere. Celtic harpist and singer Loreena McKennitt got her start as a busker knocking out tunes on Saturday mornings in the market hall.

Kensington Market is the city’s other market and was my local. I could walk through Kensington sampling everything from exotic cheeses to Trinidadian Doubles (a kind of miniature falafel laced with lethal Trinnie hot sauce). When we expected guests, I could count on the green grocers, bakers and butchers to provide everything our table would need from fresh capon to splendid Gateaux Basques (a sinful, cream-filled pastry).

Vancouver’s Public Market is another oasis of rural sensibility thrust into the middle of a big city—this one specializing in fresh fruits of the sea. And every Thursday through the summer, local land-based producers set up the Granville Island Farmers’ Market that’s been running for two decades. Coastal urbanites can stop by to pick up fresh produce then stroll over to the Public Market Seafood City for king crab or Miyagi oysters on the half shell.

With so many great role models, a cast of characters selling wonderful Okanagan products and an increasingly enthusiastic client base, I’m pretty confident in the future of our own Kelowna market.