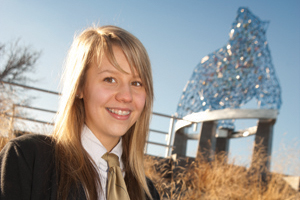 Lately it’s been a whirlwind of interviews and photo sessions for 15-year old Alaina Podmorow and it’s looking like it won’t stop for awhile. The Lake Country student was recently named Canada’s Top Teen Philanthropist for her efforts to aid women and girls in Afghanistan.

After hearing a presentation by journalist and human rights activist Sally Armstrong five years ago, Alaina was moved to try to do something for the young women of Afghanistan who had little hope of attaining the education that would allow them to determine their own futures.

Armstrong’s closing statement, “The worst thing you can do is nothing,” caught the youngster by the heartstrings. Her response was to set up Little Women 4 Little Women in Afghanistan (LW4LW).

Working with 18 schoolmates from Davidson Road Elementary School, Alaina organized a silent auction and other events to raise funds for literacy, to train teachers and librarians and to provide the tools necessary for Afghan girls to learn.

When I talked with Alaina, she had just returned from Toronto where the award was announced on Canada AM.

“I heard I was one on the finalists on my birthday in January,” she says. But Alaina didn’t know until the first day of February that she had actually won the honor.

The title came with two cash awards from title sponsor Mackenzie Investments. In recognition of her achievement as Canada’s Top Teen Philanthropist for 2011, a $5,000 donation has been made in her name to Little Women. Alaina also receives a $2,500 personal prize. She says she hasn’t yet decided what to do with the cash. However, Alaina hasn’t been to Afghanistan and wants to go, so the personal award may help with her travel expenses.

“We’re going to give a library to a village in northern Afghanistan,” says the teen, but she is reluctant to give the name of the village for security reasons. The Taliban still operate in the area.

The library will be part of a program called ABLE Box Libraries. Women 4 Women (the parent group of LW4LW) delivers everything needed?—?shelving, books, stationary and training materials for librarians?—?in a box. All the village needs to provide is a room for the library and security.

LW4LW has raised over $375,000 since its creation. Unlike a number of charities, 100 per cent of the money raised makes it to the group’s workers and programs on the ground. Because of this, LW4LW has also been able to contribute to the teacher training programs run by Women 4 Women. “Last year we trained 1,200 teachers, but this year we hope to produce 2,000,” says Alaina.

Little Women has also gone viral. There are now branches throughout Canada and the United States.

As proof of the program’s success, its founder talks about the pen pals she and her classmates have made friends with in one of Kabul’s many orphanages. “I guess nothing says it better than the fact that we’re now receiving their letters written in English.”

All of this has had a profound effect on the young Okanagan woman. Alaina believes that “…with education girls will be able to stand up for themselves.”

She says that education is so important to these Afghan girls that they go to school in shifts because their schools can’t accommodate the more than 4,000 females who want to attend.