Tara Tschritter ~ Inn From the Cold 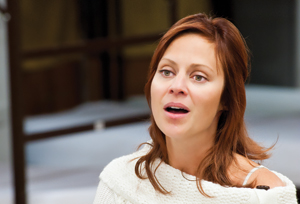 Lining the walls of the men’s section at Inn From the Cold–Kelowna  (IFTC) are 12 sets of bunk beds. Unlike military barracks, the bunks here are not all metal-framed—two wooden beds keep the room from feeling regimental. In the women’s area beyond a divider are four sets of bunks. Each bunk is numbered and comes with a corresponding locker. The walls of the room are brown and the ventilation system looks industrial. Yet for all that, the room has a warm and welcoming feel.

Staff and volunteers who run IFTC want it to be user-friendly for the nearly 300 people who will find a bed in the hostel this year. Inn From the Cold is a volunteer program designed to give shelter, food and other necessities to Kelowna’s homeless population. The Inn offers “low barrier” accommodation and help to its guests.

“We try to keep it as accessible as possible,” says executive director Tara Tschritter as she outlines the Inn’s philosophy. “Pets are okay and we have space for carts and bikes. The only condition we have is that our guests are non-violent.”

Volunteers are trained to deal with violent guests by de-escalating the situation. There’s even a “naughty” bed in the area where the overnight staff work. If a guest can’t be calmed, the RCMP are called in, but this rarely happens—guests are grateful for the efforts of the organization and volunteers.

When the question of prohibited substances or alcohol arises, Tara doesn’t dodge it, but acknowledges the reality of the streets. “We don’t prohibit someone from coming in if they’re under the influence. Nor do we ban illegal substances, we just ask that they aren’t used on the premises and we make sure they’re locked up for the night in the person’s locker.”

Once guests have stored their gear in their locker the volunteers lock the doors then keep the keys. Guests can’t access them until morning. This ensures that nothing is stolen, a common complaint among some shelters where theft is rampant, and that drugs and alcohol aren’t used on the premises.

Make no mistake: this isn’t a haven for drug addicts. The majority of people who use the shelter’s facilities are men in the 40- to 60-year-old age range. In the past two years, Tara has seen more and more seniors taking advantage of the Inn’s services and there are even couples who come in for temporary accommodations.

“Housing prices in the city,” she says, addressing one cause of homelessness in Kelowna, “are still way too high for many people to afford, and the low rates paid by income assistance helps to keep people on the streets. What we need to deal with the homeless here in Kelowna is more affordable housing.”

Although she manages the day-to-day operations of the organization, Tara isn’t a full time employee. No one is. She gets help at the Inn from Jordan, a social worker, and John, a retired NGO worker who spent a good portion of his career in Thailand and Cambodia. In addition, more than 330 active volunteers work more than 1,000 shifts a season at the shelter and in the Outreach and  Inn Home Support programs for people who want to stay in their homes, but need help to do so.

Guests who use the accommodations are encouraged, but not required, to help around the facility. They man the free store operated by IFTC to provide necessities like soap, toothpaste and warm clothing. A number of guests are tradesmen and they donate their time to do some of the physical maintenance on the building.

Local businesses have also jumped on board with support. IFTC has an annual budget of approximately half a million dollars. Funding is split with $250,000 needed to pay rent, utilities, food, maintenance and other cash requirements, while another $350,000 comes in the form of donations of goods and services.

Local companies like the Delta Grand Resort, Pit Stop Husky, Cobb’s Bread and Sparkling Hills Resort give extensively throughout the year. Service organizations like the Capri and Ogopogo Rotaries do a lot of fund raising for the group.

Food is provided by other charitable organizations like the St. Vincent de Paul Society, which donates fruit and vegetables, and the Salvation Army which comes in twice a week to bring food then cook and serve the meal. There’s even a man simply identified as John-the-Coffee-Guy who provides the shelter with coffee for the year.

Seated around tables in the centre of the room in mid-October were 13 new volunteers undergoing training to work at Inn From the Cold. They’ll take courses like Non-Violent Crisis Intervention and Meet The People—a curriculum for dealing with the homeless.

Some of the volunteers learned about the Inn by word-of-mouth while others actively searched the Internet for the organization’s website or for online ads.

Guys like Michael, who owns a company and has the time to volunteer, and women like Debra, who lives downtown and was inspired by the number of homeless men pushing carts laden with all their possessions, are joining the others to help alleviate the problem as best they can.

Inn From the Cold’s shelter program opened its doors for another season last month and will operate through until spring. December is a busy month for the group, but pressure drops off around Christmas as many homeless people reconnect with their families for the holidays. January and February are the shelter’s busiest months.

Demand for beds dies off as the weather improves. The shelter closes down with the warm weather because many of the homeless are fiercely independent and camp out through the summer so they can maintain control of their own lives.

It’s biblically fitting that the shelter facilities for Inn From the Cold are situated in an upper room above the St. Vincent de Paul store on Sutherland Avenue. And, although IFTC tries to maintain its secular approach to community service, it is the child of a number of different local churches and denominations.

Kelowna’s Inn From the Cold was created in 1999. Surprisingly, it’s not aligned with other organizations across the country despite the fact that they all have the same goal and similar names.

“We’re always recruiting volunteers and can use donations of money or goods” says Tara. For more information on Inn From the Cold and details on how to volunteer or contribute in another way, call 250-448-6403 or visit www.innfromthecoldkelowna.org.

Story and photo by Bruce Kemp