When six-week old Callum* stopped cooing and started coughing, his parents were concerned. A sweet baby, he loved to practice his new smile—until his siblings got sick.

At first the older children’s symptoms presented like common colds—mild coughs, low-grade fevers, runny noses. A week later, they were plagued by coughing spells that left them gasping for air. Soon Callum caught the disease, continuous coughing squeezing the air from his little lungs, his struggles to inhale marked by a distinctive, whooping sound.

Rushed to the ER, blue from a lack of oxygen, he was brought to the resuscitation room and intubated. For ten days a ventilator helped him breathe.

“He was pre-arrest,” the attending physician, recalls. “He was minutes from dying.”

Little Callum spent a month in the hospital while his bigger siblings?—none of them immunized for the Pertussis (whopping cough) that nearly killed their brother—recovered at home.

A comprehensive mix that guards against diphtheria, tetanus, pertussis, hepatitis B, polio, and Haemophilus influenza type b, it’s  administered at two, four, and six months of age. Like all childhood vaccinations recommended by Health Canada, it is free.

“I put in a very strong word for vaccines in the first year of life because pertussis, for one, can kill babies under the age of six months,” Kelowna Pediatrician, Dr. Tom Warshawski says.

“Vaccines are the tugboats of preventative health”

Vaccines contain the dead or weakened cells of diseases and when injected or taken orally or nasally, encourage the body’s immune system to build antibodies (which identify and neutralize bacteria and viruses) and immune memory (allowing a more rapid and effective response to infections previously encountered).

According to Immunizebc.ca, most children will be fully protected after vaccination, never developing the deadly diseases they’ve been immunized against. Very few—mostly those with health issues or compromised immune systems –may have only partial protection, meaning they may develop some symptoms but not serious complications. As with any medication, the rare child can have an allergic reaction that may result in swelling, hives, or in serious cases, wheezing and breathing problems.

“Vaccination is one of the greatest health achievements of the 21st century,” Dr. Althea Hayden, a public health physician with the Interior Health Authority says. “It has saved more lives than any other health care intervention.”

Thanks to national immunization campaigns, viruses like measles have essentially been eradicated in Canada. According to Jasmine Budak, who wrote a compelling article, “Our Best Shot” for the Walrus, November 2014, the last endemic occurred in 1998. Why then, in April 2011, did the worst North American outbreak of measles in a decade shut down a Quebec high school? And Disneyland theme park in California, December 2014?

Budak reported, when the Quebec outbreak’s last diagnosis was recorded some eight months later, 776 people had been infected, 11 percent seriously enough to require hospitalization. Meanwhile seventy cases of measles were traced to the Disneyland disaster, with the outbreak spreading beyond California into seven neighboring states and Mexico. The National Public Radio reported 25 percent of infected people were hospitalized in that health care crisis.

Both outbreaks were blamed on unvaccinated travelers bringing the virus home. Incredibly contagious, measles can move on air droplets. Itchy and feverish, infected individuals are uncomfortable but more serious consequences can include pneumonia, brain inflammation and even death. Before the measles vaccine was introduced in 1963, the NPR reports, 500 people a year died of the disease in the USA.

Despite the overwhelming evidence in favor of vaccinations, a new generation of parents is nervous. They’ve heard horror stories linking vaccinations to adverse reactions like seizures and autism and they’re opting out of what Dr. Hayden says is the most effective thing we can do, for individuals—and the community—to keep people healthy.

“My dad (who sadly passed away at 87 in January) grew up in the era of polio, when schools closed, pools closed, a lot of his friends were affected and died,” Warshawski says. “He lived through the nightmare and the coming of the vaccine and the eradication of the disease in North America. People of that era are flabbergasted anyone would oppose vaccines…they’re appalled at this generation who have never seen the downside of these diseases. All they’ve heard about are the events rarely associated with the vaccine.”

Much fear can be traced to 1998, when British physician, Dr. Andrew Wakefield, published a falsified study in the medical journal, the Lancet, linking the MMR vaccination to autism. While he was stripped of his license and his paper retracted in 2010 (only 12 children were involved in the study and Wakefield was paid to alter his findings), the damage was done. Fear spread like a bad disease and prodigious amounts of people began resisting immunization. Celebrities like Playboy Playmate, Jenny McCarthy, who blamed her own son’s autism on vaccinations, urged people to avoid the toxins in shots and suddenly all hell broke loose, resulting in a hellish return of measles, mumps, and pertussis.

Unfortunately the administration schedule of immunizations coincides with the onset of neurological disorders, leading people to assume a causal relationship. “One such situation is a form of epilepsy called Dravet Syndrome, which is a problem with ion channels in the brain,” Warshawski explains. “It causes intractable seizures that tend to present somewhere around two to six months.” While families draw a link to vaccinations, studies of countries that have discontinued immunizations still report a similar onset of these kinds of seizures.

The same goes for autism, which is increasingly being diagnosed in time with vaccinations, but scientists argue earlier diagnoses are now made, thanks to the inclusion of a broader category of symptoms. They’re studying whether environmental circumstances contrive to trigger the disorder in genetically predisposed kids, but as Budak reported, “Immunization arose as a tidy and timely explanation, a much-needed punching bag for weary parents without much recourse.” 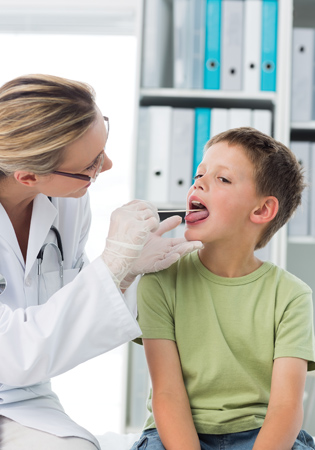 Still, Wakefield’s followers flock to Facebook and websites devoted to the discredited doctor. Where the under immunized used to be concentrated in low income and immigrant communities, now the educated and privileged are opting out. Questioning medical science, they harbor suspicions of government and big Pharma, and perhaps most frighteningly, don’t seem to care about anyone else’s child.

Just as animals group together to guard their numbers from predators, so herd immunity works to break the chain of an infectious transmission. The greater the number of immunized individuals, the greater the protection for the whole—critical for pregnant women or the immunocompromised, like those undergoing chemotherapy.

“For each vaccine and each disease there are different herd immunity thresholds,” Dr. Hayden explains. “For measles we need a 95 percent vaccination rate to stop transmission because it’s so infectious.”

The Public Health Agency of Canada reports nationally we’re largely on target for all childhood immunizations but according to Hayden, we’re not faring as well here at home.

“Morality is the herd-instict in the individual”

“There are different ways of looking at vaccination rates,” she explains. “One of the most common is the ‘up to date for age…’ By age two children should have had all their primary series vaccinations plus their 18 months booster, with a six-month fudge factor…if you go for two years old, only 68 percent of children are up to date for age in Interior Health.” 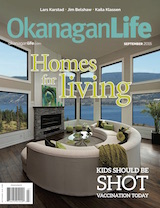 Our September issue features a stunning showcase of Thompson Okanagan homes. Publisher Paul Byrne weighs in on the federal election and writer Shannon Linden presents some compelling reasons for protecting your kids — and everybody else’s — with vaccinations. Wine writer Michael Botner urges you to stock your cellar with Corkscrew Drive classics wines from Okanagan Falls Wine Country.