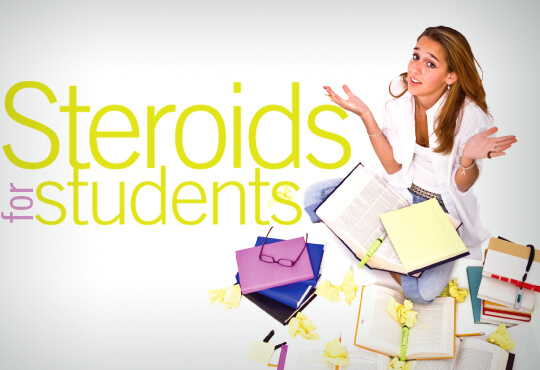 Performance-enhancing drugs can give athletes an edge on the competition, but can pill-popping pump up students’ grades?

When “Benfastic” Johnson flew across the finish line in Seoul, capturing the 100-metre, 1988 Olympic gold medal, Canadians marvelled at our machine of a man. He’d clocked his win at a world-record breaking, 9.79 seconds.

Then the truth came out: Johnson was indeed a machine—a carefully constructed, steroid enhanced, ripoff of the real thing. Ceremoniously stripped of his titles after testing positive for a performance enhancing substance, Ben Johnson’s downfall gave rise to an ongoing issue in sport: Who’s using drugs—or perhaps more accurately, who isn’t?

Talk of the “juice” to jazz performance is so commonplace it’s passé. What’s very today, however, is how a whole new breed of abusers is using performance enhancement drugs in an entirely different domain: the classroom.

Never mind the Olympics, nowadays young adults are competing on the world stage for employment. That puts a lot of pressure on university students and just as Johnson looked for the athletic edge, some post-secondary students are turning to academic doping to compete for scholastic excellence.

They’re touted as medicinal miracles for youth suffering from attention deficit hyperactivity disorder (ADHD), but what happens when healthy students take mild amphetamines like Adderall and Ritalin? Not an uncommon practice on some American campuses, more and more Canadian kids are taking stimulants for the purpose of staying alert for prolonged periods of time while experiencing improved productivity. Known as “study drugs,” about 5.5 percent of students recently surveyed at McGill University in Montreal admitted to taking some sort of speed for cognitive enhancement.

Supplied by fellow students for whom the drugs are prescribed, academic dopers claim to get phenomenal, short-term focus, a sort of sharpening of the mind. One student said he was able to read multiple chapters faster, free of boredom, while another claimed she pumped out a term paper in one night. Then there are exams. Who wouldn’t want to be able to comfortably cram?

If it’s a little scary, what it’s not, is limited to big cities. Students all over the country are savvy to the stuff, including right here in the Okanagan.

“I used to have a prescription for ADHD meds,” one 22-year-old biochemistry student at the University of British Columbia-Okanagan (UBCO), admitted. “I didn’t exactly sell them to friends. More like traded one for a beer at the bar.” No longer on the medication, he struggles to stay awake through long study hours, prompting him to turn to other stimulants for energy. Pulling a bottle of ephedrine (a stimulant found in some cold medications) from his pack, he shrugs. “If you’re sleeping, you can’t learn.”

While most students would agree, keeping up with the demands of studying, working at part-time jobs and maintaining their social lives isn’t easy, a significant number said that turning to stimulants—while tempting—wasn’t the answer.

A group of 17- and 18-year old young men, all of whom moved from places ranging from BC’s Lower Mainland to the Maritimes to attend UBCO, condemned the practice. “If I’m going to get something, I’d rather do it through hard work, otherwise, where’s the satisfaction?” one asked.

“The point is to learn something, not just pass your courses,” another added.

Some students were unaware the trend exits. “I don’t know what it is,” an 18-year-old art major said, while a young man studying science agreed, “I’ve never even heard of it.”

Roger Wilson, senior counsellor at the Health and Wellness Clinic at UBCO admits, academic doping may not be as prevalent here but that doesn’t mean it isn’t a concern on campus.

As part of the American College Health Association, UBCO participates in the National College Health Assessment, a survey that scopes student health habits, behaviours, and perceptions. Recent results confirm: academic doping is about half the problem at UBCO as say at McGill. Of the 1,300 students who responded to a 2010 survey (three per cent male; two per cent female) almost 2.5 per cent admitted to taking stimulants not prescribed to them.

“It’s a lower number,” Wilson says, “But we have to be aware of it and keep track of any kind of substance abuse on campus.”

So far he hasn’t had any students visit his office who admit to taking stimulants for the purpose of improving performance. “It’s typically anxiety, depression or relationship issues that can involve substance abuse,” he says.

Still, being aware of the issue is paramount to preventing and dealing with it, something Wilson insists UBCO staff is uniquely committed to. “We have a tight network of staff who provide all kinds of services to students. We don’t do any active campaigning on academic doping per say, but we have an Interior Health drug and alcohol representative. We also do a lot of work in terms of a health and wellness approach to life and dealing with substance abuse.”

The helper that comes with hazards

Study drugs might sound like a simple solution, but what happened to the old fashioned pot of coffee to see a student through an all-nighter? Word is, stimulants deliver the same buzz, minus the discomforts of jittery agitation and prolonged wakefulness, not to mention coffee breath.

Trendy movies like last spring’s Limitless even glamorize the practice. When a down and out Edward Morra (played by Bradley Cooper) gets hold of a wonder drug that not only has him completing his long-endeavoured novel overnight, but speaking several languages while sporting super cool clothes and a much better hairdo, the message is perpetuated: popping a pill can put us on top.

But is it sustainable?
Or even safe?

Kelowna psychiatrist and UBCO consultant, Dr. James Chin, says no. The list of potential side effects of taking medications like methylphenidate and dextroamphetamine (generic names for brands like Ritalin, Concerta, Biphentin, Dexedrine, Adderall and Vyvanse) reads like one of those pharmaceutically endorsed commercials. Users may experience non-life-threatening symptoms such as shakiness, motor tics, increased heart rate and blood pressure, restlessness, anxiety, poor appetite and headaches, to name a few. Then there are the more dangerous side effects like delusions, hallucinations, seizures, fatal heart problems and critically elevated blood pressure.

“The dangerous effects are almost exclusively seen when the medication is not used as prescribed,” Dr. Chin explains, which is reassuring to those under a doctor’s care. The problem, of course, is that students using stimulants on the fly are doing so in unmonitored secrecy.

While potentially lethal, overdoses are rare, but it is the addictive potential of the prescriptions that concerns doctors most. “People who use stimulants are at risk for developing abuse of and dependence upon them,” Dr. Chin warns. If someone takes more medication, more frequently than prescribed, a level of tolerance develops. Seeking the ever-elusive high, he or she soon experiences the spiral effect: taking more medication to get the same impact. “Students may begin using stimulants fairly innocently for academic doping,” Dr. Chin says, “but inadvertently put themselves at risk for serious substance abuse and dependence.”

A recent editorial in the Canadian Medical Association Journal goes so far as to suggest, given the addictive qualities of stimulants, not to mention unapproved methods of use (including snorting and injection of dissolved, crushed tablets), educational institutions must recognize “grade-boosting” stimulant abuse as a life-threatening issue.

If such dangers exist, why are some people still OK with the idea? One suggestion is that stimulant use has its place in certain situations—like military pilots flying on long missions?. But as Dr. Chin points out, “The official use of stimulants in the military is controlled and regulated, while academic doping is completely at the discretion of students themselves.”

Ultimately, prescribed medications can only come from doctors—perhaps the best check point for keeping the problem of unmonitored use at bay. While some students will go so far as to “fake” symptoms of ADHD in order to legitimately get their hands on a prescription (sadly there are Internet sites offering advice on how to do this), the onus is on physicians—not to deny medications when indicated—but to monitor their use more scrupul ously.

To this end, Dr. Chin has advocated for tighter guidelines for prescribing stimulants on campus. “Our medical system exists to help those suffering with disease and illness, not to serve the educational needs of students,” he says.

If an informal survey of students is any indication, that approach seems to be working. While some ADHD patients might sell their extra pills (Adderall goes for about $10 a tablet) or more dangerously, forego them, it’s not as though there is an excess supply up for grabs.

“To be honest,” one McGill student reportedly said, “It’s pretty hard to get hold of….Around exam time a lot of people are looking for it.”

“I’ve been asked, sure,” an 18-year-old, UBCO science major with ADHD says.  “I could make some quick cash but I’ve never been tempted to sell my pills.”

Students have to help themselves

Even if the methods have changed, the appeal of the quick fix is nothing new. “We know university students have been trying to game the system in any way they can,” Ian Cull, associate vice president of students at UBCO admits. “It used to be Jolt Cola. Now it’s Red Bull.”

In fact, energy drinks (like Red Bull) are particularly popular and a seemingly innocent choice of stimulants. If consumed in high doses, however, they can send the heart into palpitations. “We’ve had to call an ambulance and send students to the ER because they thought they were having heart attacks,” Cull says.

Naturally his first concern is for student health and safety but he says logistically there’s little that can be done to stop students from taking what they want. “We do not have any academic rules that prohibit ingesting a substance before an exam and we have no mechanism to test for that. You can’t assess it and you can’t enforce it.”

The bottom line, according to Cull, “There’s no magic bullet out there. You just have to do the work.”

For the most part, students seem to agree.

“It would be like faking it,” a young science major from Vernon said of academic doping. “Besides,” she added, “I don’t need it.” Which is not to say she and a group of friends were entirely unsympathetic to those who might turn to stimulants to keep up. “If someone is really struggling, I can see it,” she said. “But then they should get some help from counsellors.”

Roger Wilson’s sentiments exactly. “Our approach on campus is, if you are late with your paper, talk to your prof. If you’ve been working hard and can’t get it together, our professors are very understanding.”

For students contemplating how best to compete, maybe another look at Ben Johnson is enough. He is remembered—not as a great athlete, not as the author of a self-published autobiography, not as an advocate for AIDS orphans in Africa—but for doping. ~Shannon Linden