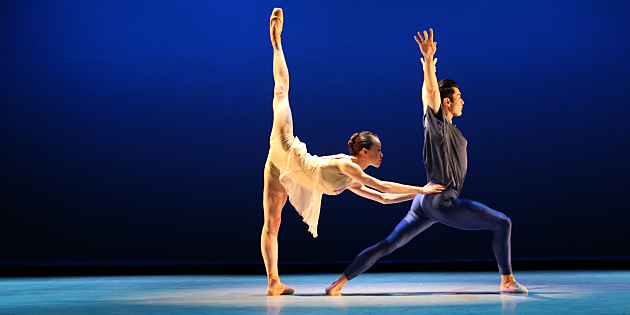 Ballet Kelowna closes its season with an unparalleled mixed programme of live music and contemporary ballet from some of Canada’s most celebrated choreographers and composers in Renaissance, April 29 and 30, 2016, at the Kelowna Community Theatre, and at Oliver’s Frank Venables Theatre, May 1, 2016.

“I am thrilled and honoured to close our 2015/16 season with this incredible line-up of exceptional dance and music talent,” says Artistic Director and CEO Simone Orlando. “It is such a privilege, and rare opportunity, to have assembled some of our country’s finest artists, including Heather Myers, celebrated choreographer and former dancer with the Nederlands Dans Theatre, James Kudelka, and John Alleyne, former Artistic Director of Ballet BC, with two all-stars from The National Ballet of Canada, Hannah Fischer and Ethan Watts, and Toronto’s Continuum Contemporary Music - for what promises to be a truly unforgettable celebration of the arts.”

The extreme athleticism and depth of emotion of Ballet Kelowna’s company of artists will be on full display in a series of new and remounted works from renowned Canadian choreographers Myers, Kudelka, Alleyne, and Ballet Kelowna Artistic Director and CEO Simone Orlando.

Also on the programme, and making their highly anticipated British Columbia debut, The National Ballet of Canada’s rising stars, Hannah Fischer and Ethan Watts, will perform a rousing duet titled The Wild Space Between Two Hearts choreographed by Robert Binet, Choreographic Associate with The National Ballet. Fischer will further demonstrate her remarkable skill in the world premiere of a solo (title TBA), also choreographed by Binet.

Renaissance is the third and final performance in Ballet Kelowna’s 2015/16 season. balletkelowna.ca

Box Office:
Online: venablestheatre.ca or at door on performance night