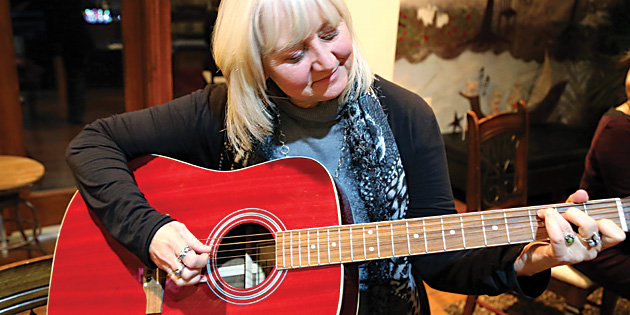 One of the most rewarding moments I’ve ever had in my writing career was when a friend preformed one of my monologues. Until then the entire life of that little story had only existed in my mind and in writing. In those two minutes of excited re-enactment, the original idea held more life and possibility than a thousand years on paper. The fact that she was a fabulous actress and the piece was full of dirty jokes probably also helped, but in that moment a more important impression was made: an individual carries the spark of genius, but great fires are lit through collaboration.

For emerging musicians, nothing could be truer. They write with the hopes of their words being sung and perhaps their songs being played by those who love them. But how does that happen without an audience? Lynda Norman, Sandy McAfee and Mike Pederson are three locals who made a space for this experience in our community. 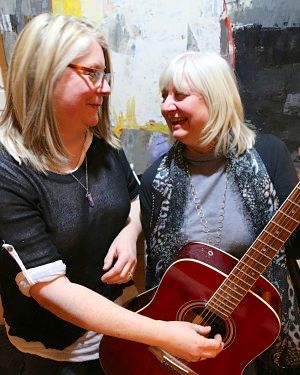 It all began last August when Lynda was recording with Mike of Music City Studio. With a desire to fill his recording room more often, he mentioned to Lynda that he was looking for ways to make it happen. Lynda met with Sandy and after coffee and a half-hour of brainstorming the idea was born: they would use the studio to gather people who wanted to share their music in front of a supportive audience. Project Songwriter Stewdio was born.

An evening at the Stewdio goes like this: a musician (whose name is drawn from a hat) gets up and plays two original songs, the group picks their favourite, they all learn to play along, adding their various thoughts and talents into the mix, and then they record the results. After a short break for some wine and cheese, they do it again with a second artist. The outcome has been phenomenal. “The song is always enhanced,” says Lynda, “it just gels. The synergy just brings it all together. It’s what we’ve created in that short amount of time, to see the look on the songwriters’ faces, it’s such a gift to them to hear what has happened.” 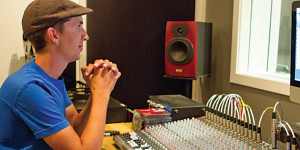 The group meets twice a month on Mondays. “There are usually about 12 to 15 musicians in the room, some are vocalists; sometimes we have an accordion, mandolin, cello; there’s a stand up bass...” The list goes on as the talent pours in and they’re often left with standing room only.

A quick look at the Stewdio’s Facebook page and a listen to the recordings on Bandcamp are proof of how well things are working out. Songs that were once held close to a novice composer’s heart are now available across the world, still true to their original aim, but enhanced to a level only a collective can create. There are plans to launch the project in communities across Canada, and they’ve just released their first CD as a fundraiser for the Kelowna Food Bank.

Songwriters Stewdio takes place on the first and third Monday of every month. Proceeds from Live Vol.1 go directly to Kelowna Food Bank.

The Songwriters Stewdio is one of the ribs in an ever-growing arts umbrella called the Association of Artists for Creative Alliance. The Kelowna-based group has a goal to develop programs that bring creativity to the forefront in our community. The project has already attracted the eyes and ears of Music BC and new collaborations are underway to bring a version of the songwriters project to local schools. Individuals are getting attention too. Local musician Phillip Nugent’s track Winter Song, reworked and recorded at the Stewdio, was solicited by the Yukon as a theme song for a winter festival. 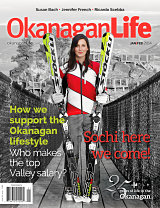 As seen in the Jan/Feb Okanagan Life Magazine.

How terrifying and thrilling to play a new song to a group and have them all jump on board to work on it with you. Sounds like a dream roller coaster in the amusement park of creativity. For me it would be like writing a play and having it preformed and filmed on the spot. This idea instantly has me feeling inspired and suddenly thinking of all sorts of new dirty jokes and clichés, plus a gruesome death scene I’d have to throw in. But alas, this project is for musicians only.

All people need is the courage to push their work further instead of hiding it from the world. The deciding factor is often about finding a strong enough motive to come out of the cocoon. Like any great metamorphosis, with a gentle push and a place to unfold, a single cell idea can be thrust into organic emergence. As a writer unafraid to stretch her own poetic licence, I call this process truly the stuff of community, love, and butterfly magic.