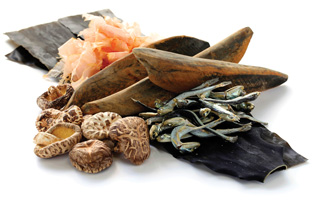 Mention umami and you’re likely to get blank stares. But it’s there alright, adding a savoury, meaty, brothy character to many foods we eat every day. Umami is also present in certain wines and it plays a significant role in wine and food pairing.

One element of the umami taste was isolated in 1908. Searching for the “delicious essence” of dashi, the stock that forms the basis of Japanese cuisine, researcher Kikunae Ikeda first identified umami as a type of amino acid—glutamate.

Dashi ingredients are rich in umami, but you'll find the fifth taste in many wines.

Dr. Ikeda went on to produce monosodium glutamate, or MSG, as a seasoning for enhancing both stocks and vegetable dishes. Further research, particularly since the 1980s has led to international acceptance of umami, and the “fifth taste” has stepped in as one of the most exciting foodie trends of our time. Examples include David Chang’s Momofuku sensation and the L.A.-based Umami Burger chain.

Unlike the other primary tastes (sweet, salty, bitter and sour), umami is not an isolated taste, but an enhancer. It comes in many forms, with glutamate being the most abundant in nature. Its two-phase action consists of the amino acid trigger, which stimulates certain papillae on the taste buds and, when activated by foods rich in nucleotides (DNA and RNA), an intensifier that amplifies the taste of umami. Mother’s milk, Parmigiano-Reggiano cheese, fresh tomatoes, stews, ketchup, Portobello mushrooms, sardines and aged beef are all high in umami, as are certain wines such as Australian Shirazes and creamy Chardonnays.

The best quick reference for umami-based foods and recipes is The Fifth Taste: Cooking with Umami, by David and Anna Kasabian. Experiment with the taste by adding 1 tablespoon of dried shiitake mushrooms to a cup of water. Boil for several minutes and let cool before tasting. Paired with wine, umami increases our perception of bitterness, while saltiness in food decreases this effect. For example, try an aged tannic red wine with crumbly blue cheese; higher umami taste increases bitterness. Now try it with soft blue; less umami decreases bitterness.