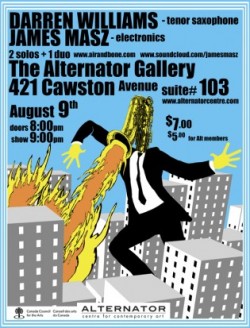 Enjoy a live performance by Canadian improvisational saxophonist Darren Williams at the Alternator Centre for Contemporary Art in Kelowna. Williams has been winning over audiences in Western Canada with his unforgettable performances that stretch musical boundaries. His performance at the Alternator on August 9 wraps up an 11 city cross-Canada tour funded by the Canada Council for the Arts and the Canadian Circuit for Improvising Musicians.

Fresh from his appearance at the 2013 Vancouver International Jazz Festival, audiences can expect to be mesmerized by Williams’ incredible array of extended solo techniques on the saxophone as composition, improvisation, and physical endurance are explored. For his performance at the Alternator, Williams will be joined by local artist James Masz, who will perform a solo set on electronics and join Williams in a duo performance. Together, they will unleash a sonic cluster of roiling improvisations.

Darren Williams is a British Columbia based saxophonist and bassoonist who pushes the limits of extended instrumental technique into regions that are lyrical, terrifying and uncanny.

Admission at the door $7 ($5 for members). Concert begins at 7 p.m.
The Alternator Centre for Contemporary Art.