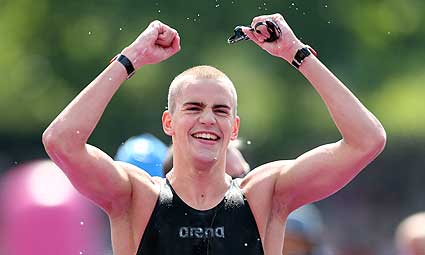 Weinberger took home the bronze medal in the 10-kilometre open water swim event at the 2012 London Summer Olympics and is now set to hit the Okanagan waters to share his swimming wisdom. All registrants of the Apple Open Water Swim will be eligible to participate in a special open water swim clinic with Weinberger on Friday, August 16 before the races commence.

“Open Water Swimming is now an official Olympic sport and having Olympic medalist Richard Weinberger from Victoria compete in the Kelowna Apple Open Water Swim will inspire our youth to participate in the sport,” says Brent Hobbs,  Club President and English Channel swimmer.

Swimmers can register for either the 1.5-km or 5-km race both to be held at Tugboat Beach in Kelowna.

The Okanagan Masters Swim Club is one of the largest Masters Swim clubs in British Columbia, with five trained coaches and a home base at the H20 Adventure Fitness Centre. The Club is open  for adult swimmers of all kinds: competitive, recreational, open water and triathletes.

For more information about Okanagan Masters, visit their website www.okmasters.com