Olympic Roundup: Kevin Hill I raced my heart out 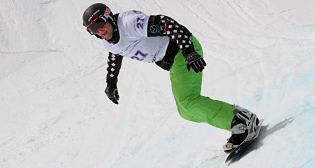 Race cancelled due to heavy fog, it's alright because I'm ready to go! Hopefully tomorrow we will run qualifiers! pic.twitter.com/UQWGs2ULqa

Snowboard cross racing is not without its up and downs, and no one knows that better than Vernon's Kevin Hill after his Olympic debut.

On Olympic Day 11, Men's Snowboard Cross race was cancelled due to heavy fog. Undeterred, Kevin came blazing out of the gate when competition resumed the next day and finished first in both his heats in the 1/8 finals and quarterfinals.

He was second on the leaderboard, leading into the semifinals. With only 25 seconds to go, the 27-year old Olympian was racing toward a berth in the finals when he was knocked down from behind by a Spanish racer. See the CBC Olympic video.

"I raced my heart out for Canada today and did everything I could to get a medal."

"I raced my heart out for Canada today and did everything I could to get a medal," posts Kevin on his social media channel. "My day ended in a crash in semi finals in second place. I finished 2nd in the small final for 8th place at the Olympics! Thanks so much for everyone's support."

Vernon fans came out celebrate the incredible Olympic run at a city reception for both Kevin Hill and  Justin Dorey.