What came first, feeling or emotion?

When I watched locals Kelsey Serwa and Josh Dueck win Olympic medals in Sochi, I found myself tearing up (men are not supposed to admit this.) Lest one of my hockey teammates reads this and misconstrues that I admitted to sobbing (in print), I retract my aforementioned statement here. Indeed, what we cry for or laugh for changes across our lifetime and with personal experience. But what came first, emotion or feeling? 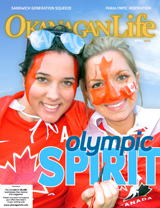 My experience of Kelsey’s Olympic silver medal in Sochi might provide a clue. I was lucky enough to attend the 2010 Vancouver Games as a journalist for Okanagan Life. I took pictures of the Serwa family and Kelsey at her first Olympics and felt the sting of her finishing just outside of the medals. Kelsey’s grandparents, Cliff and Lois, were on separate Okanagan Life covers in the 1990s and Kelsey herself was on this January’s cover. These are but a few of the memories that connect me with the family, the Olympic spirit and my emotions.

Josh Dueck’s words as he arrived home were poetic theatre, suggesting his sweetest feeling of the Games “will be to enjoy this medal with my girls.” That comment was beautiful because it wasn’t logical at all—instead it was emotional and infused with feeling.

Emotions do not ask for permission to exist. They just happen. Neuroscientists are able to watch decisions form in a subject’s brain using fMRI technology, and accurately predicting those decisions 7 to 10 seconds before they are made. The trillions of neuronal connections that fire to form the thousands of feelings we have, allow us to experience an emotional life. Feelings are what we are left with after the exhilarating boat ride, a favourite ski run, a spectacular meal, a vivacious wine, a winning hockey game or watching a podium-finish Olympic race.

My belief is that even more theatre is playing out in the region of the brain that only purports to understand logic. Logic causes the human brain to over analyze our problems, ideas and dreams, instead of simply embracing them. Too much logic is the tonic of our societal discontent.

We bath our problems in this elixir of logic simply because the cognitive brain by design often seeks out the simplest solution, which is usually not the best. We would do well to take Kelsey’s words to heart: “After the first turn it’s all instinct and reaction.”

Unfortunately, we have a propensity to be logical when what we should be doing is to feel — race, run and win!