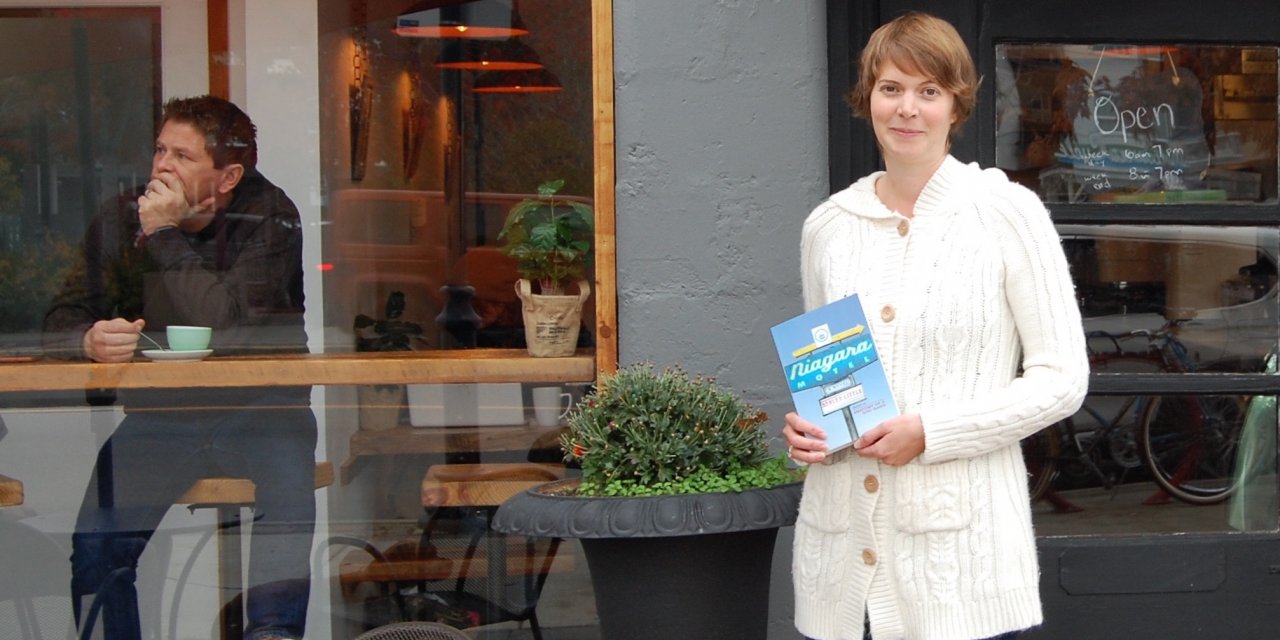 Beneath the whirr and buzz of coffee grinders, I sit with Okanagan author Ashley Little as she tells me about the inception of her most recent novel, Niagara Motel. Released last autumn, this is a road trip novel about a boy named Tucker Malone, who is sent to live in a group home aer his mother is hit by a vehicle in Niagara Falls. Tucker and his new friend Meredith, escape the group home to nd his father, who Tucker believes to be Sam Malone of the sitcom Cheers. The book is a quirky crash landing into the early 1990s, begin-ning in Niagara Falls and darting across North America to land amidst the Rodney King riots in Los Angeles.

Niagara Motel was recently nominated for the Ethel Wilson Fiction Prize. is is Little’s second nomination for the prize that she won in 2014 with one of her previous books, Anatomy of a Girl Gang. (Thee others are Prick: Confessions of a Tattoo Artist and The New Normal.) She has received numerous awards for her work including two BC Book Prizes, the Sheila A. Egoff Children's Literature Prize, and the City of Vancouver Book Award.

I meet the author in the newly opened Bean Scene on Pandosy Avenue in Kelowna. It is raining out-side and yellow fall leaves stick to my boots as I go in. After we sit down to our Americanos, I ask Little why she wanted to write about Niagara Falls.

“It was this meeting of the sacred and the profane,” she tells me, remembering a trip she took to the Ontario city to celebrate New Years 2011. 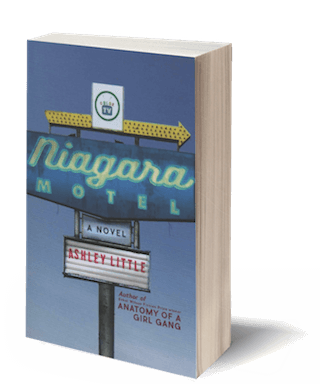 “It was my rst time being there since I was a child. What struck me was that the town itself was so gaudy and noisy; it tries to pull you in with all its junk and smushed right up against it is the natural beauty of the falls, which is what we’re really there to see. I thought: is is energetic. Something is happening here at this crossroads. ere is this energy that is both beautiful and kind of dirty and nasty. I wanted to explore the kinds of charac-ters and stories that would happen in a place like that.”

We sip our coees as conversation turns to the main character of the novel, Tucker, and how he sprang to life fully formed. “I was cleaning my house," says Little. "The sunshine was lighting up the hardwood floor—it was just blar-ng white light—and I heard this voice in my head. It said, 'I was born in a laundromat in Paris, Ontario.' And I thought, Oh! is is the first line in my novel. The voice was as clear as if someone had just said it to me.”

This revelation came while Little was in the middle of research into the world of sex work for Anatomy of a Girl Gang. “While I was researching I created this character Gina Malone, who I thought the novel would be about, but when I heard that voice I knew it wasn’t Gina. It was her son, Tucker. He just kind of presented himself to me.”

Gina, a narcoleptic stripper, is struck down by a car early in the book, leaving Tucker to be taken care of in a group home while she recovers.

Why a road trip novel?

“There was some kind of momentum running through this novel, from the movement of the water of the falls, to the greyhound bus with Gina at the beginning of the book. There is all this forward motion and I wanted to continue that right up until the very end when they step o the bus. The travel is a reection of the motif of the water of Niagara Falls that is an unending force that is always moving and changing.”

As our conversation comes to an end, I am thinking about the way that what we read changes how we see the world. Our empathy for unlikely characters helps us to see each other more clearly, and in the end it all comes down to place. In this way our communities reach out into the world. Our stories allow us to encounter people outside of ourselves and experience the gore of the world, like the gaudy energy of Niagara Falls, and Tucker’s unconditional positive regard. So, our conversation draws to a close and I ask Ashley what it is like to be a writer in the Okanagan.

“It’s a good place to be. The writing community here is very supportive, but it’s also not competitive. People just want to help each other and boost each other up because we know that it helps all of us in turn. It’s a fantastic place to be a writer.”