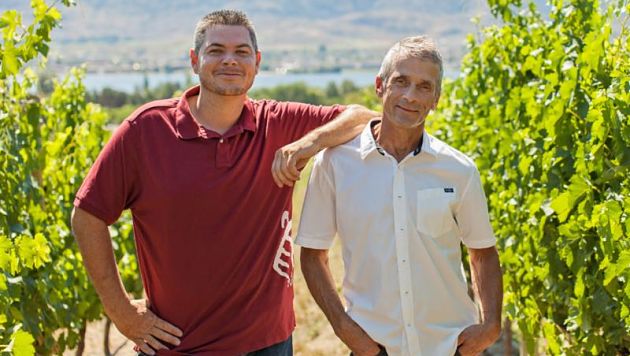 Nk'Mip Cellars made a spectacular finish at WineAlign's 2014 National Wine Awards bringing in medals for all of the 14 submitted wines. The winery earned a platinum award for the 2013 Qwam Qwmt Riesling Icewine as well as three gold, five silver and five bronze awards. This impressive showing wins the title of #2 winery in BC and #3 winery in Canada.

Nk'Mip's Senior Winemaker Randy Picton (right) is one of the most esteemed in the region, and is renowned for his commitment to making every vintage spectacular. He is extremely pleased to accept this award on behalf of Nk'Mip Cellars.

"With so many exceptional wineries in BC it's an honour to receive this recognition. It is very gratifying to see consistency of results across our entire portfolio. This achievement is based on many hardworking, dedicated and passionate people, including my assistant winemaker Justin Hall (left), cellar supervisor Aaron Crey, and our viticultural teams."

As the Vineyard Manager, Sam Baptiste's careful attention to premium viticulture practices at Inkameep Vineyards, established in 1968, contributes heavily to the success of Nk'Mip Cellars' wines by ensuring each vine is scrutinized and only the best grapes make it into the winery during crush.

The Osoyoos Indian Band has been led since 1985 by Chief Clarence Louie. A strong supporter of native and economic independence, he takes great pride in developing members of The Band. Nk'Mip Assistant Winemaker Justin Hall is an example of a Band member who, through Louie's influence, has advanced into a meaningful role within the community.