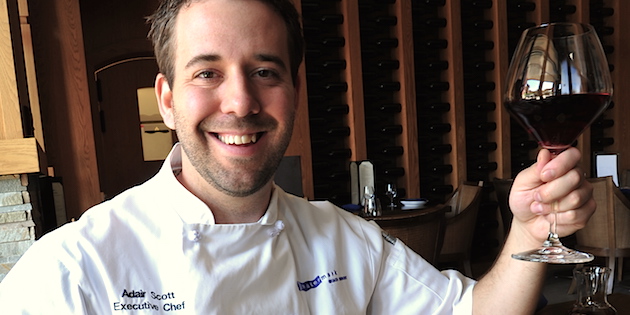 Traditional or trendy, its got to be healthy

Like all Valley chefs, Adair Scott is committed to using local produce in his kitchen and that includes the salmon caught by the Osoyoos First Nations fishermen. He uses both the fresh fish when he can and the sockeye canned earlier in the year.

“I like to use the fish the Osoyoos band catch, but here at the restaurant we’re down a ways in the food chain. The band’s mandate is to provide traditional food for the elders and others who can’t go out and catch it themselves. Only after the band’s needs have been looked after do fishmongers get their chance and I come in on the tail end of that.”

It’s not too much of a tail end, as the salmon has been returning to the lake via the Columbia River in near record numbers. In 2012, (See Okanagan Life’s October 2012 story, “Return Of The Sockeye”) nearly 60,000 fish were harvested – an astonishing number considering there were worries in the mid-1990s that the stock was close to being wiped out.

Adair is very concerned that he produces the freshest and healthiest food for his clientele at the resort. Because Watermark is a family resort he caters to all ages. “I don’t want to feed kids chicken fingers. We have a kids menu, but it includes real food like roast chicken instead and I don’t have any burgers on the menu.”

Real food is a byword for the young chef. Over the course of a season he and his staff will work hard to serve 2,000 plates. About 50% of those are traditional steak and potatoes, reflecting an older generation’s tastes, but the other side of the coin is the more adventurous series of dining experiences like the recent Oyster Festival that the resort just held. 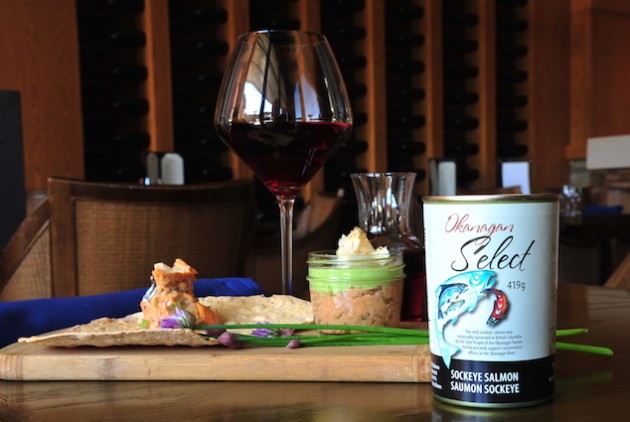 “You know it’s ironic that we can hold a successful Oyster Festival in the middle of a desert. This is our fourth of fifth time for that event and we’ll be holding it again. Right now we’re serving a menu of all Pacific shellfish like the Baby Gem Beach Oysters, but next year we’re going to try to include oysters from the east coast, the United States and Ireland as well as other countries around the Pacific Rim.”

Being unsure of the number of times the festival has been held doesn’t signal the approach of senility, it simply means the 31-year-old who originally hails from Prince George, is a recent addition to the Watermark brand. 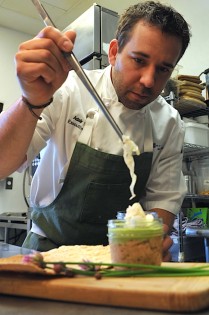 He came to the Watermark as the sous chef after apprenticing with Chef Paul Cecconi at the Harvest Golf and Country Club. Before that he travelled to Melbourne, Australia to gain some Antipodean culinary experience and to see a different part of the world. This all followed on the heels of his training at Okanagan College and Vancouver Community College where here completed his formal, red seal training.

Food and wine runs in the Scott family. His wife Sarah is a viticulturist plying her art in local wineries and both try to promote the food culture of the Valley.

When guests arrive at Watermark one of the activities suggested for them is a tour of local farming operations like Covert Farms. As strange as it may seem for a resort restaurant that makes a profit from those guests, the resort’s operators encourage their visitors to purchase local produce to bring home and try cooking in their en suite kitchens.