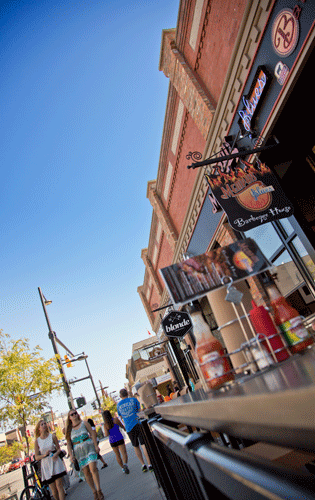 Entrepreneurs looking to start and grow a business should look west, according to the Canadian Federation of Independent Business's (CFIB) eighth annual Entrepreneurial Communities report. The communities around Calgary took top spot for the second year in a row, with Kelowna and the area surrounding Edmonton close behind among major cities.

"The west is still best, but we're seeing the beginnings of a power shift away from the traditional entrepreneurial power centres in the prairies towards BC, as the fallout from oil prices continues to hit the region. We are also seeing parts of Central Ontario becoming more and more desirable for entrepreneurs," said CFIB chief economist Ted Mallett.

On the first day of Small Business Week in Canada, CFIB's Entrepreneurial Communities report takes an in-depth look at how 121 cities/economic regions support and promote entrepreneurship. It scores each of them out of 100, by looking at 14 indicators across three main categories –Presence, Perspective and Policy.

Saskatoon, Guelph, Barrie, Regina, Moncton and the grouping of communities that ring the cities of Toronto and Vancouver round out the top 10 among major cities. Among mid-sized cities, BC's Penticton fares best, followed by Grande Prairie, AB, Collingwood, ON, Okotoks, AB, and Brooks, AB.

Once again, suburbs and regions surrounding cities tend to have better entrepreneurial environments than city centres because of lower relative costs, while still having reasonably strong access to large markets.
"Each city has its own unique development story, but the one thing they have in common is the entrepreneurial spirit that drives them," added Mallett.

Our October issue features the revitalization of main streets in the Okanagan. We’re also living the Good Life with the Best Chef in the South Okanagan, Paul Ceccinni, and exploring what’s […]