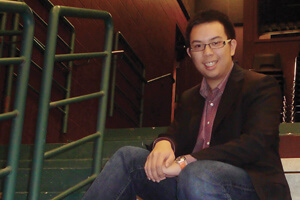 Jeremy Woo doesn’t do things for others to gain glory, accolades or attention, he reaches out because it fills him up.

“When you help someone else, you feel and they feel better. There’s twice the benefit,” says Jeremy, a 17-year-old, Grade 12 Kalamalka Secondary School student.

For the past two years Jeremy’s been the brains and the workhorse behind the Vernon Lawn Bowling Club’s 24-hour bowling relay raising almost $7,000 for the United Way, a good portion of which he sees go back into his community.

“If I follow my heart, I’ll make a difference. I really want to leave things a little better than they were before,” he says with pride.

Jeremy credits his parents with his drive and strong work ethic and says if it weren’t for his family he wouldn’t be making such a difference.

Along with his volunteer work Jeremy also runs the school newspaper, stage manages for the drama club, curls four days a week and holds down a part-time job. Jeremy is also leader of the Safe School Team, a group that promotes respect, anti-bullying and connectedness.

“That’s really important for kids to understand,” he says.

Yet as busy as Jeremy is doing for others, he makes sure school work is a priority, maintaining a 90 per cent average.

“Hard works gets you somewhere. It might sound old fashioned, but that’s how it’s done.” ?~Stacy Pavlov