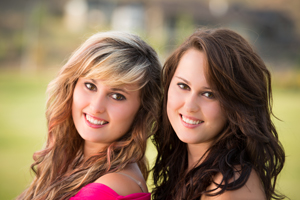 Dané le Roux sits in bed and for a moment the then 12-year-old thinks before she picks up her ballpoint pen and notebook. After filling three pages of whatever comes to mind, she hands the notebook  to her mirror image sister.

Julie scans through the words. “Well, this is good. Let’s see what we can get from it.”

The twins continue to work on the thriller that originated from those first three pages. They type and reshape and prepare for publication. They’re 16 when The Watching is published as an e-book and paperback.

In the story, teenaged friends Marissa and Suria are intrigued by the supernatural phenomenon of a mist forming a wolf and increasingly feel that something or someone is watching them. The young writers say that their book is about facing your fears and how things are not always what they seem until you delve deeper into a situation.

The youngest of five children, Dané and Julie were born in South Africa and spent most of their school career in Saskatchewan. In 2010 they moved to Coldstream and are now students at Kalamalka Secondary School. For both girls, English is a favourite subject.

Recalling the process of creating the book, Julie says: “We’d work on it every single day for months and then we’d forget about it for a few months, so it took a long time. That is why we didn’t get it published until now.”

Dané adds that they continued to write in notebooks because they didn’t expect to get published. Their English teacher in Saskatchewan did the initial edit and when they finally started typing the manuscript, the book changed dramatically. “The story itself is the same, but a lot more events were added to it...”

“And a lot taken away,” Julie adds. “If you compare the book we wrote to what it is now, you wouldn’t see much similarity.”

Their mother, Lynn, recalls how the twins have been creating stories together since the age of four, acting them out with their Barbie dolls, and drawing comics. They write their stories the same way they talk: comfortably completing each other’s sentences.

“Whenever we get bored,” says Julie, “we just hand it over and say: ‘Go somewhere from here.’”

Now aged 17, the twins are about to submit their second book, Dream with Me, for publication. They let the cat out of the bag a little on the plot, admitting that the inspiration for this “very sad book” was Saskatchewan trick rider Dee-Ann Mezei, who died in May 2010 after a horse-riding accident.

And they’ve already moved on to a third project, with yet another theme. Dané and Julie are now close to finishing Liquid Ice: The Legend. “All three of our books are completely different. You would see no resemblance in genre.”

They hope to have all the books published by the time they graduate, after which they’d like to go to university and continue using their “wild imagination,” writing together as a hobby.

Dané and Julie are adamant that authors should know the end of a story before they write the beginning. Obviously this literary duo knows where they’re headed. —Tia Steyn