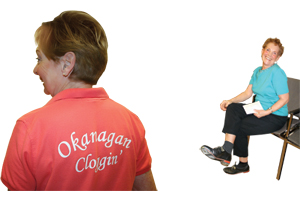 It’s 1812, Lancashire, England. A weaver sits on an old stool over a damp floor, spinning cotton. There are rows of women to her left and rows to the right. The large cotton mill, airy and dark, whirrs and clicks to the spinning of thread. Up from the floor another noise purrs, the rise of a warm-blooded beat. The sounds of machines are mimicked through hundreds of wooden soled feet. Heel and toe, heel and toe, their work turns to music through clogging.

Fast forward 200 years. A dark winter night frosts the Okanagan as I peek through the windows of the Westbank Senior Centre. Working hard are three rows of women, dressed in cotton, with the glisten of sweat on their brows. Their feet clog madly like the ladies of yore, but the looms are long gone, the stools kicked back and their job?—?to rock-out to a playlist of pop songs.

Clogging is a form of dance that has been passed down over centuries, between cultures, popping up in different forms across continents. It’s travelled from the factories of the Industrial Revolution, to the festivals of the Netherlands, to the dance halls of the Appalachian Mountains. There are many styles as well as names. Whether you’re buck dancing, flat-footing, in a hoedown, jigging, sure-footing or simply stepping, the gist is the same: have feet, will hustle.

Curious to see how it is being practiced in my neck of the woods, I find myself at the Senior Centre to learn what I can from a clogging class. Barbara Bizovie, the instructor, smiles from the front of the room and introduces me to a beaming group of beginners. The sweet ladies, some with silver hair, some with gray, and one or two that have held on to the blond, click around the room, practicing steps and asking Barbara their questions. I consider popping onto the floor to maybe try a move or two, when suddenly the music starts up again. Instantly the ladies switch from chatting friends to hop stepping machines, aligned in Riverdance rows of heart thumping action. “Wow,” I whisper to myself. “That’s awesome!” For some it’s only the second or third lesson and yet they have no problem clogging to the downbeat of fast paced songs in time and in unison.

I watch and take pictures until the advanced class arrives. A rosy-cheeked woman named Jean Anderson sits down next to me and gives me a tour of her shoes. Modern clogging shoes look especially fun, not just because Jean has added sparkly gold laces, but because they have four taps, also called “jingles,” that give them a sound distinctly different, more jubilant, than your average tap shoe.

The ladies who have been clogging for awhile fill me in on the lifestyle. Great cardio, great music, great friends they say. Throw in a couple of trips to Nashville and other towns for clogging conventions, and you can’t beat the micro-culture of the step-dancing world. Not to mention there are hoards of young clogging men out there. Fast and furious they duel it out, with sweat-drenched shirts draped over sculpted abs while the force of their thundering legs makes their torn blue jeans hold on for dear life. At least, that’s what I saw on Youtube when I Googled the sport.

For now, the group at the Senior Centre is all ladies, but they have had a husband or two come out. Barbara leads the advanced class through songs that range from German instrumentals to Top 40 favorites. All of it goes well with clogging. “It’s about becoming part of the music,” Barbara says. She’s right. Perhaps that’s part of the appeal. Tap and other forms of dance are often about doing solos with choreographed steps to a melody. Clogging, in all its foot-stomping glory, is about fueling the tune with the beat of your feet; step, weaving step, into music. ~Gillianne Richards