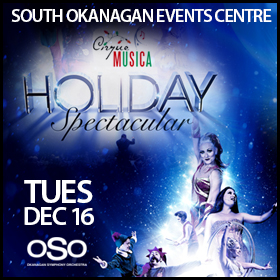 The South Okanagan Events Centre, in partnership with Okanagan Symphony Orchestra, announced today that Cirque Musica is coming to Penticton on December 16, just in time to celebrate the holiday season.

Cirque Musica takes audiences on a musical journey to a land of dazzling beauty, mystery and suspense. The show blends the grace and thrills of the world’s greatest circus performers with stunning symphonic music from classical, POPS, and popular repertoire performed in Penticton by the Okanagan’s very own Symphony Orchestra. Audiences are treated to a full sensory experience that will have them on the edge of their seats and in awe of the beauty, thrills, and majesty that is Cirque Musica.

Cirque Musica features top circus performers from around the world and veterans of Ringling Bros. and Barnum & Bailey and Cirque du Soleil.

The music includes all-time favorites from the classical repertoire including excerpts from Flight of the Bumblebee, Tchaikovsky Violin Concerto, Holst the Planets, and more. From the POPS world, the show features pieces by John Williams and a musical salute to the Beatles. Cirque Musica also features original music composed by Emmy and Academy Award nominated composer, Marcelo Zarvos.