Caring couple: in person with John and Carol Bubb 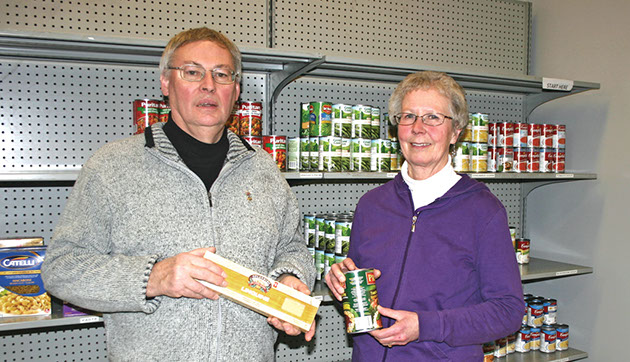 It was a lucky day for the community of Summerland when John and Carol Bubb decided to drive through town. In 2003, they had sold their computer consulting business in Victoria, their home for 24 years, and were looking for a place to semi-retire.

“We were on our way home from Kelowna, my hometown, and decided to drop into Summerland,” says Carol.

By chance, they drove by their current home and immediately fell in love with it. The house was not for sale, but that didn’t deter the Bubbs who contacted a local realtor and struck a deal. John operated a woodworking business from a shop on their property before the couple retired completely.

Since settling in Summerland, John and Carol have been busy community volunteers. Last year John was awarded the Queen Elizabeth Diamond Jubilee Medal primarily in recognition for his work with the Food Bank and Resource Centre.

The Food Bank which has been in continuous operation since 1985 in the basement of the Summerland United Church was upgraded and the Resource Centre added a year ago. John, who was instrumental in establishing the Centre, now serves on the board, makes sure the computers are running properly and responds to enquiries at the reception desk.

“We strive to serve as a one-stop source of information and assistance to Summerland residents in need,” he says.
Those needs include acquiring food, free use of the internet and information about services and how to access them.

“Office space is also provided for meeting representatives of social service agencies from out of town,” says Carol.

John stresses the importance of the many volunteers who ensure that the Food Bank and the Resource Centre run smoothly. “Carol is always on hand to help when volunteers aren’t available,” says John.

Shortly after arriving in Summerland, John also joined the Rotary Club. “John and Carol work harder than anyone to make sure things are running smoothly,” says Janice Perrino, a fellow Rotarian and Summerland mayor. The couple can be found at almost every activity to raise funds for the many organizations and projects the club sponsors.

The SPCA also benefits from John and Carol’s caring spirit. A dedicated volunteer for the Penticton branch, Carol says they’ve had hundreds of foster cats and kittens in their home over the years. On occasion she and John will even adopt their foster cats. Currently, they have two adopted mature cats and three almost-grown kittens whose mother was killed when they were only a few days old. “I bottle fed the kittens and became so attached to them that I couldn’t give them up,” says Carol.

On a different note, Summerlanders enjoy the chiming of the Town Clock thanks to a combination of John’s computer skills and craftsmanship. Along with helping to upgrade the works of the downtown landmark, he built a mini-replica of the tower to house the original works in the museum.
It’s hard to imagine a couple more involved in their community. “John and Carol are amazing people,” says Mayor Perrino.