Call of the Drums 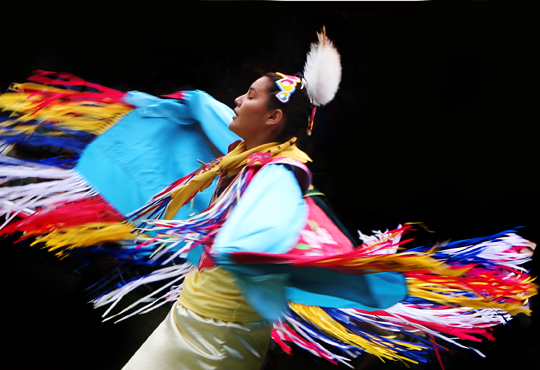 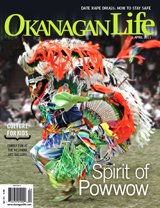 Next he pulls out his pants, shirt, and front and back apron, all edged with long ribbons that move like grass blowing in the wind when he dances. In days gone by, grass dancers were sent ahead in search of a campsite. They’d dance to flatten the grass and bless the ground for the camp. Today, before a powwow begins grass dancers are called into the arena to dance and bless the ground.

The most striking bit of Bill’s regalia is his roach—a headdress made from porcupine hair, orange dyed fur and golden eagle feathers. He stores it on a baseball bat, using a tensor bandage to secure it in place.

When Bill shows children his gear he lets them touch. The more adventurous try on his ribbon shirt and do a spin. Every second Friday you’ll find him, along with fellow members of the Little Hawk Drum Group, at Sensisyusten elementary school, in Westbank, teaching kids drumming, dancing and stick games.

Bill smiles when he recalls the first time he danced. He was five years old and in Alaska with his dad, Emery, who thought it would be a good idea for him to perform a traditional dance for the people. Bill didn’t cotton to the idea but his dad made him do it anyway.

“He was mad,” says Emery. It turned out to be a great thing. The boy enjoyed the attention and he has become the best dancer in the family.

At age 10, Bill swapped his moccasins for a pair of spurs and took to the rodeo circuit. Many injuries later he decided to hang up the spurs and return to dance before he got seriously hurt. “I put it down,” he said of his dancing. “I just had to pick it up again.”

Bill learned all the popular First Nations men’s and women’s styles that are seen at today’s powwows. A dancer at heart, one of his favourite films is Saturday Night Fever starring John Travolta. One day he’d like to learn ballroom dance.

At school he tells the kids to “dance from your heart” and “dance for the people and the community.”

Bill joins his dad, brother (Emery junior), Derek Sheena and Maynard McRae around the school’s big drum, which can seat eight players comfortably. Soon the pounding rhythm of the drummers and their high-pitched voices fill the air. Yah-eh-yah-eh-way-ah-hay....

These men sing without words. Some First Nations songs have words and some are a mix of both word and sound. Emery Robins only speaks English fluently and says he never sings in other languages. “If you are going to use the language, you need to know it,” otherwise you run the risk of mispronouncing a word and offending people.

Songs are either individually or communally owned. A group who wishes to sing another’s song must first get permission. Emery writes his own songs. His latest is in honour of his granddaughter, a traditional dance competition winner and crown princess, who despite illness gets out when she can.

Every dance style has its own beat that dancers listen for. To the untrained ear it can be hard to pick out, but not for Krystal Lezard, of the Westbank First Nation, who has been dancing since she was five. Dancing and singing helped the young woman restore her spirit after she broke free from her addictions. A native language and culture trainee at Sensisyusten, she teaches girls to dance. “It gives these girls confidence in themselves,” she says.

She points to the drum group. They have taken off their ball caps. “This is a prayer song,” she says. “No photos.” When the group is finished playing they cover the drum with a blanket as a show of respect. The drum is sacred to First Nations people. There are special drum ceremonies and codes of conduct.

Emery used to retire his worn drums by going into the mountains and hanging them up, but he doesn’t do that anymore because people who don’t know better found them and took them home. Now he lets fire take them away. He’s put Bill to work making drums and teaching him the codes of conduct.

It’s a beautiful day to powwow.

The origin of the powwow comes from the plains tribes of North America and was organized by warrior societies. Drumming and dancing was traditionally a men’s only activity, but as the warrior societies faded away in the late 1800s and social gatherings gained momentum women and children began to take part.

It’s a beautiful day to be Indian.

“It’s nice to have connection with my culture as an aboriginal person,” says Crystal Prince, a community member of Westbank First Nation and originally from the Brokenhead Ojibwa Nation.

Crystal began dancing when she was 10 under the tutelage of the Dubrett family from the Okanagan Nation.

Last summer she went on the powwow circuit to compete in dance after a five-year hiatus spent caring for her girls: Payton (12), Phoenix (7) and Ryken (3). She took all three girls with her to Kamloops, Omak (Washington), Wellpinit (Washington) and Skw’lax (Shuswap). All but the youngest competed.

“It’s fun but tiring,” she says. Getting three people’s hair braided and getting everyone dressed into their regalia is a two-hour marathon. Her friend Kanani Nahanee made Crystal’s fancy dress and shawl. Her sister, Jennifer Prince, a master bead worker, made her yoke, belt, leggings and moccasins. Matching beaded hair ties, choker, headband and earrings, along with eagle feather plumes complete her outfit.

The first time she wore the beadwork she noticed a change for the worse in her step. “Took me three years to redo my footwork because of the heaviness of the beads,” she says.

An accomplished dancer Crystal teaches traditional, fancy shawl and jingle dress. She taught her two daughters, Payton and Phoenix, to be jingle dancers. She is also teaching them the importance of the dress.

The jingle dress dates back a hundred years. The story as told to Crystal is that of a young Ojibwa girl who was dying of sickness. Her father received a vision of a healing dress and awoke to the sound of rain on the teepee and began fashioning the dress. Each day he added a cone-shaped bell to symbolize the sound of rain. When he was done there were 365 cones, one for every day of the year. A dress ceremony was held with the girl wearing the dress. At first she had to be carried around because she was so weak, but as the ceremony continued she got stronger and stronger and by the end she was healed.

Often called a medicine dress, Crystal tells her daughters to say a prayer for the sick when they dance.

The powwow begins at noon with a parade (grand entry) led by eagle staff and flag bearers. Veterans and active soldiers trail in closely followed by tribal chiefs, princesses, elders and powwow organizers and dignitaries.

“Ladies and gentlemen let’s welcome the dancers of the men’s traditional category. Come forward gentleman. Come on in. Dance your style,” calls the powwow MC.

During the grand entry head dancers lead the dancers into the circle in an orderly fashion starting with men’s traditional, grass and fancy, followed by the women’s traditional, fancy and jingle. Teens and juniors follow in the same order.

“Ladies and gentlemen, how are you enjoying the grand entry so far?”

Applause greets the dancers. Once all the dancers have filed into the area, a song is sung to honour the flags and veterans. After a prayer, the dancing resumes with intertribal dances followed by competition dance.

“Aboriginal people sure know how to get dressed on a Saturday afternoon,” calls the MC.

For a lively immersion into First Nations culture be sure to take in a powwow this summer. –Karen Slivar

One of the largest celebrations of First Nation’s culture and heritage in Western Canada. The event attracts 500 competition dancers and sees 5,000 spectators a day. Grand entry on Friday at 7 p.m., Saturday at noon and 7 p.m., and Sunday at noon.

Dancing, singing, crafts and traditional foods. The main grand entry takes place on Saturday at noon. Follow the signs off the Trans-Canada Hwy.

• Do not touch the drums.

• Do not touch the regalia.

• Never pick a feather up off the ground. Fallen feathers are given a ceremony and returned to their owner with a reminder to take care of such a sacred object.

• Stand and remove your hat during special songs or when asked to do so by the MC.

• Photography is not permitted during special ceremonies, the MC will tell you if and when it is allowed.

• Ask dancer’s permission before taking their photo, most are quite happy to have their photo taken.