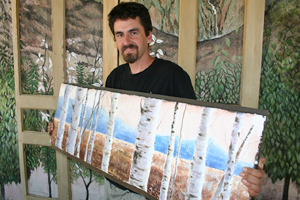 Many years ago, while a young student in Mr. Miles’ art class at Kelowna Secondary, I dreamt of one day reaching some kind of artistic greatness, hopefully including a large body of impressive and ridiculously expensive paintings I’d make along the way. I had a few ideas on how to help hurry things up: a) win a prestigious art award, preferably with an emblazoned trophy of a golden woman wielding her paintbrush of glory; b) get hired to do paintings for a major Hollywood movie (ever see the 1998 version of Great Expectations? It looks like Ethan Hawke is the artist, but he’s just acting out those arm swishes over what is really Francesco Clemente’s amazing work); or c) become an artist in residence, the golden term that for a long time I thought meant an artist living somewhere in the back of a gallery, working relentlessly like a magic shoe elf who would have inspirations or requests sent in at lunch and leave out fresh creations by morning. Only the real greats get jobs like that.

Sadly, at the end of high school, even though my portfolio included a well shaded, framed portrait of our principal called Mr. Ennis in the Raw, wicked and evil Mr. Miles gave the artist of the year award to some other kid, crushing my dreams in the art world while simultaneously sharpening my revenge skills as a future writer. As for Hollywood, art movies are hard to come by, and the recently filmed Flicka 3 in Kelowna didn’t send me any requests for insightful horse paintings needed on set. Becoming an artist in residence seems to be the only shot left, so this month I head up to the Caetani Cultural Centre in Vernon to meet one, see what life is like, and if I have a chance.

James Postill greets me from his straw bale studio tucked in the lush landscape at the back of the Caetani house. The grounds have a deep history and are not only home to artists, musical and theatrical performances, art markets, camps and workshops, but the main house is also equipped with a rumoured ghost, who perhaps, on occasion, looks down from the attic at James and wonders just what the heck he’s up to.

Busy among buckets of lime, pigments and plaster, James is a fresco master in the making. His studio at the centre is a practicing ground for the medium in its many forms. He’s currently covering the outer walls of the studio with a variation using milk paint, turning a gray palette into a forested wonderland. No, he doesn’t actually live here, but his paints and creations do, and his regular presence welcomes all guests to discuss and observe the method while he works. He shows me one of his first fresco-ish attempts, using plaster layered on drywall. A heavy piece to hold, it depicts a row of birch trees, limber and lit by a warm sunny day. He lets me feel the weight and trace the surface marks, showing where one day of work began and where it ended. Fresco is tricky, paint gets sucked up off the brush in seconds and there’s no wiggle room for blending like you would on canvas. Real frescos, like those of the Italian masters, took years just to prep the sand and lime painting surface, a long-term job that James has also begun.

“How’s the residence experience?” I ask. Is he nearing fame and fortune? “He still has his day job,” pipes his mom from the shade of a tree nearby. James nods in agreement but quickly follows with how much he loves being here, having the space and sharing his passion with people. Being named artist in residence has given him a title that’s not about validating his talents, it’s about honouring his commitment to art. The Caetani Centre, by creating the spot, has offered a fertile and supportive foundation. James is the quintessential artist: prolific, humble and patient with the outcome. Considering all that, I’m probably better off going for a spot in a Hollywood movie. – Gillianne Richards