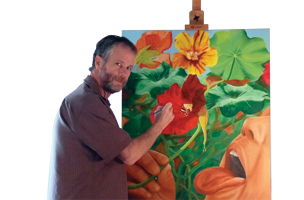 The master at work. Wielding wet earth between cracks of stone. The artist, deep in thought, building walls that bide the time before he returns to his true calling.

Kevin Lousier may not be widely known in the art world, but I like to think he’s earned a star among the world’s true artists in some ethereal walk of fame. He belongs to a league of creative souls whose daytime hours are spent working as a means to feed the family, but whose midnight oil is fuelled by a different muse.

For decades it was working behind the gears of a backhoe and most recently turning rubble into garden walls that sustains him, along with a lifetime of support from his wife, Lori. Despite a long history of pushing dirt, and a tough outer appearance that says he knows the meaning of a hard day’s work, his shell belies a deeper sensitivity that gives him a relentless knack for making things, well, kind of beautiful.

Over the years in the quiet of many makeshift studios he would fiddle with this or that and teach himself the workings of a dark room or how to shape a clump of stone into a spiralling sculpture. He serves an industrious habit, which turns out unassuming works of art made at the hands of a small clock that measures the ticks and seconds of his spare time.

I’ve met many people like Kevin, closet artists who have incredible talent, but for one reason or another have never really pursued it as a career.  They hold court in the gardens and kitchens of the Okanagan where their paint pots and easels overtake the spots of watering cans and place mats. The promise of form replacing function and a room of one’s own is slowly built in the silence of unpaid time.

Kevin and I sit in his kitchen surrounded by paintings, large and colourful. He only introduced himself to the craft sometime last year, but you can already tell by the work on the walls and paint on his cheek that he’s in it for the long haul.

“I am a painter that does rock walls on the side,” he says. I smile and realize I love this wisdom. A voice in the back of my head quickly decides I am a movie star who writes magazine articles on the side. A bit of a stretch perhaps but I’ll run with it. Kevin is not so much the dreamer I am though. He’s a doer. Again, a trait of the closet artist, someone who knows how to get things done and do a job well to the end. Almost the opposite starting point from the stereotypical artist who is good at dreaming but not so much at wading through the tedium of making it happen.

The tough part about doing art on the side is when you hit the tipping point on the production line. At some point you want to maybe try to share it.

How do part-time artists sell their work? Should they just give it away to family and friends or continue to fill their houses? If you’re not a full time or well established artist, how do you bring your work to the public?

Kevin’s answer is both practical and blessed with hope. “I decided to put on my own show.” He pilfered some office space from his son, enlisted the help of his poster packing wife, and built a Facebook page that was soon flooded with artists willing to join him and a handful eager to help. “It was one of those things where you don’t wait for someone else to do it, you do it yourself,” says Kevin.

And so he did. This May you can join Kevin and local artists and coordinators Theresa Bishop, Sara Lige, Diana Gillrie and many more for the first annual Art ’n’ a Half. A show for the community that shares the love of art and the effort we take to make it a part of our lives—part-time, full-time, anytime we can.

Art ’n’ a Half  runs Friday, May 4 and Saturday May 5th at 302–1353 Ellis Street, Kelowna, just across from the library. ~ Gillianne Richards