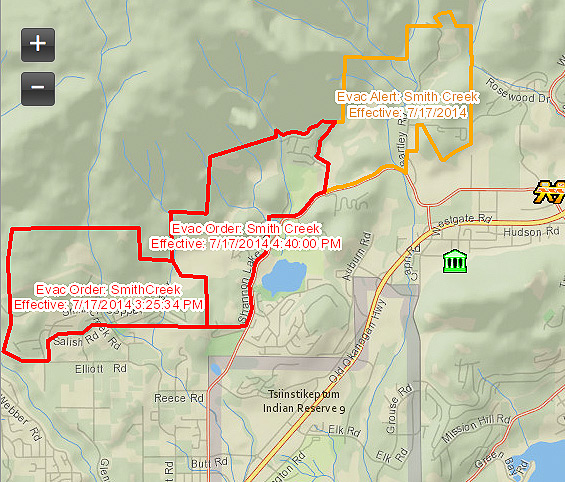 It has been a relatively good night on the fire-lines as crews monitored the Smith Creek fire.

Field reports suggest there were a few flare ups during the overnight hours, but they were knocked down quickly by fire fighter patrols from West Kelowna, Kelowna, Lake Country and the BC Wildfire Management Branch.

Late last night, the fire was estimated at 200-hectares.  Later this morning it’s anticipated an update will be available once crews have had an opportunity to see the fire from the air during daylight hours.

Incident Command for the fire will develop a plan of attack for today taking into consideration weather conditions and other factors.  It’s expected an aircraft and ground crews will resume their vigorous attack on the fire with the goal of building fire guards and working towards containment.

RCMP members continue to staff roadblocks on the perimeter of the evacuated areas and are patrolling throughout.

No new Evacuation Alerts or Orders are in place. Approximately 2,500 residents from almost 1,100 homes remain out on Evacuation Order.

Residents from about 150 properties on Lenz Road, including the Pinewood Villa Mobile Home Park and from 1898 to 2515 Bartley Road remain on Evacuation Alert and should be prepared to leave their homes on short notice should fire behaviour increase.

A detailed map showing streets and addresses affected by the Evacuation Alert and Evacuation Orders can be viewed at www.cordemergency.ca.

The Emergency Support Services reception centre at Mount Boucherie Secondary School, 2751 Cameron Road was open overnight, assisting some evacuated residents with food and accommodation needs.   The centre will remain open today to help those residents who have not yet registered.

In order to continue to provide adequate water supplies for the fire-fighting effort, residents living west of the W.R. Bennett Bridge are asked to continue restricting their household water use and not to water outdoors.

All residents on the west side of Okanagan Lake from Peachland, West Kelowna and Westbank First Nation reserves are encouraged to make personal emergency preparations to ensure they are self-sustaining in the event that there is a loss of  electricity for an extended period and that they have enough water for each member of their family.

Avoid the Smith Creek area so emergency responders can effectively perform their duties.

Please only CALL 911 in case of emergency.