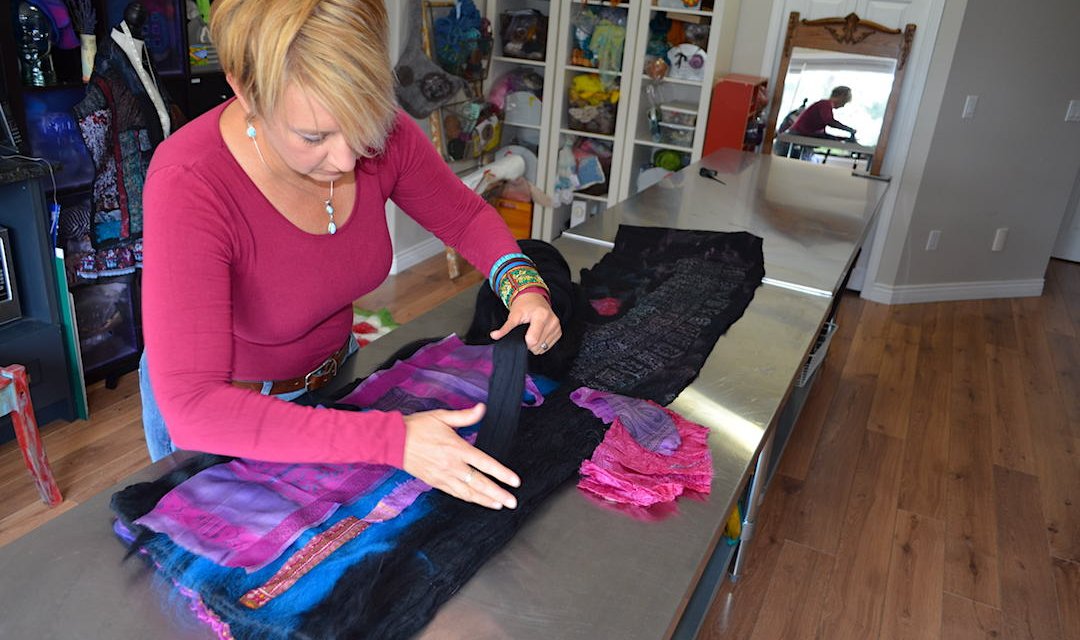 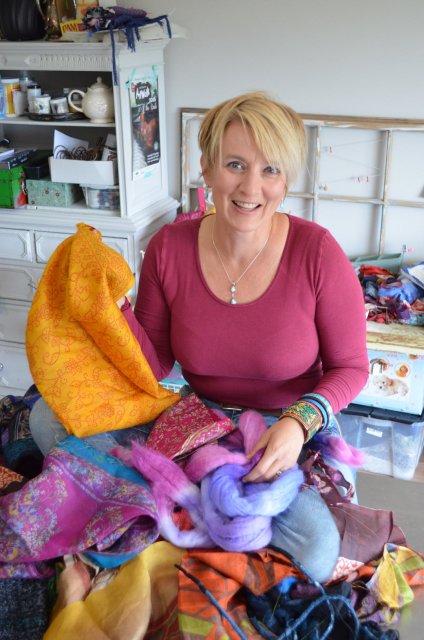 If there is one thing Denise Oyelese understands, it’s how to stay warm. Born and raised in Saskatchewan where the thermometer can descend to minus double digits, it is little surprise that this Kelowna creative has turned the idea of being “cozy” into a much sought after wearable art form.

For those unfamiliar with textile arts, “felting” is the oldest known form of fabric making, with archaeological finds dating to as early as 6,500 BC. Pure wool fibres are manipulated by using the basic principles of soap, water and friction. As the wool fibres contain microscopic “scales” and “kinks” they have the ability to bond to themselves in various directions through repeated manipulation. Simply put, if you’ve ever accidentally put a wool sweater through a hot wash, you’ve likely experienced “felting” yourself.

Denise initially stumbled into felting almost by accident. “Having been involved in the Kelowna Ponderosa Spinners, Weavers, and Fibre Artists guild since 2010, I was already shrinking reclaimed woollen garments for rug hooking and became interested in what the felting group was doing,” she explains. “They were incredibly supportive and generous in sharing their knowledge and passion. Some members even raise their own sheep, llamas and alpacas whose wool can be used in the felting process.”

Denise really started to explore felting as an art form three years ago when some talented instructors came to teach at the Shatford Centre in Penticton. Intrigued with what she had learned, she continued experimenting in her home studio, creating a series of tea cosies that lead to the creation of her business, Cozy Up.

But tea cosies were to be just the beginning of Denise’s relationship with felt.

In 2016, Felt: Feutre Canada, a national not-for profit organization for Canadian felt makers, held a week-long symposium in Penticton. With more than 80 participants from across North America, the event hosted Canadian and international instructors from Germany, France and the US. Here Denise discovered nuno felting, a process of combining other fabrics into wool fibres.

“Nuno felting is a fairly new process in that material becomes attached to the wool and that is where the magic happens for me,” she says. “Because I am using vintage sari silks and thrifted pieces, each item will produce a unique pattern that I am not able to totally control—it will crumple and fold and felt totally differently for every piece.”

The randomness of the process so intrigued Denise that she made the decision to combine her love of fashion and her love of thrifting to create wearable art in the form of long shawls. Initially, she made the coverups just for herself, but was so often asked where she found them that she decided to make shawls to sell.

Her decision was validated only weeks later at a local house concert where one of the attendees literally purchased the shawl off her back. However, not everyone wants to wear the detailed creations; one local artist has hung hers on the wall in her home to display it as an art piece.

Each shawl takes between 10 and 12 hours to create and is a unique combination of coloured Merino wool and vintage Indian sari silks. As the wool and silk are natural, breathable fibres, they can be worn year-round comfortably. Her trademark is a heart hidden somewhere in the piece, marking each work as a heartfelt endeavour.

“I consider these to be pieces of wearable art,” says Denise. “It is important to me that anyone who admires my work be aware that it is a very time-consuming process; that a real individual (not a machine) produced it; and that reclaimed garments don’t have to be thrown away, but can be repurposed and transformed.”

She continues to expand on her knowledge and this spring travelled with a group of Kelowna felters to Hungary for a series of workshops conducted by some of the top felters in the world. “The inspiration I received from being with a group who shares my passion, and learning from instructors who were so willing give of their time and talent has helped move my woolly passion to a new height.”

See Denise’s works at her Kelowna studio or online at www.cozyup.ca. 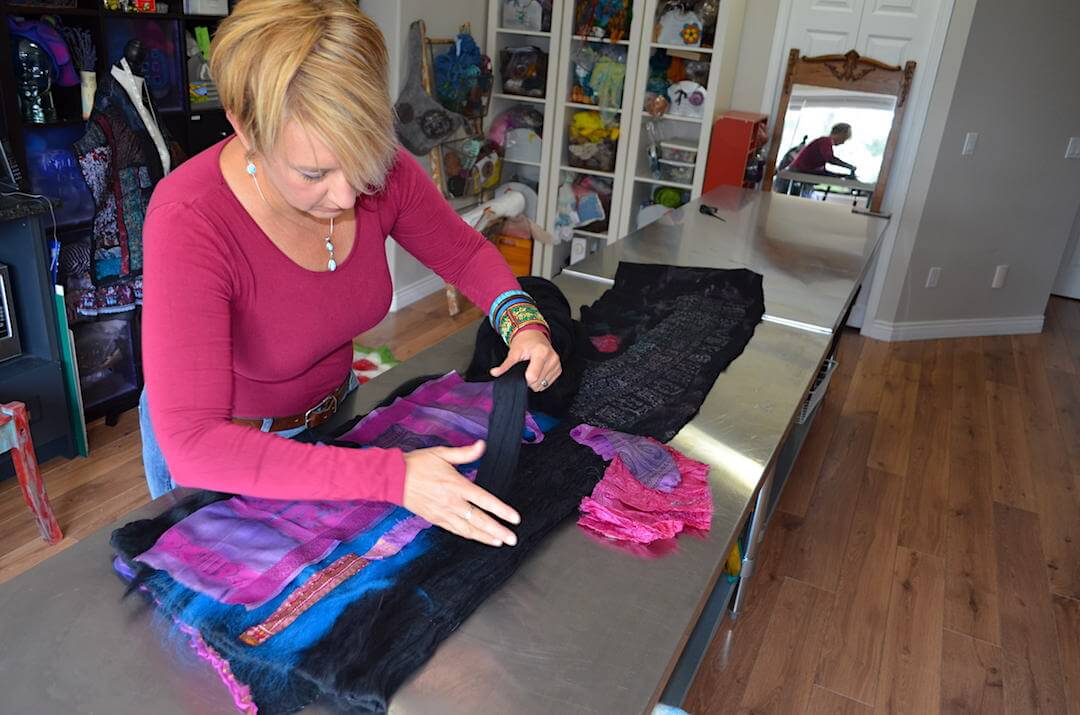